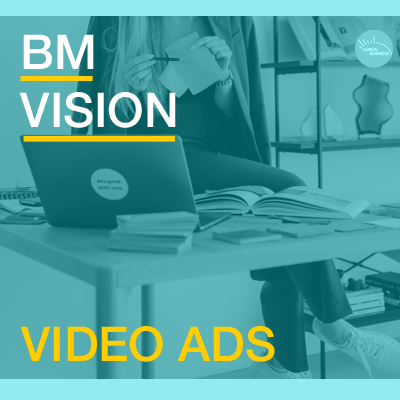 Video is becoming more and more prominent as a communications method on the Internet.

Cottage industry YouTubers, Instagrammers, and TikTokers have become celebrities in niche industries on the back of their video content. Many YouTube Channels are popular than TV. And many youth are using these same platforms as their primary method of search.

To better understand the future of social video in the online space, we need some Vision, which is why dig into the underlying business model behind Video Ads.

Ad spending in the video advertising segment is expected to grow from $180 Billion in 2022 to almost $320 Billion by 2027 according to Statista. Keep in mind that these are global #s, but the U.S. is the biggest market by far for Video Advertising.

Ad spending in the Video Advertising segment is projected to reach US$81.05bn in 2022.

Naturally, the majority of the expected growth is for mobile video advertising, with Average Spend Per User expected to nearly double over the next five years.

The market was still growing at a healthy clip of around 20% in 2022, and is expected to see a CAGR (Cumulative Annual Growth Rate) of 10 – 20% between now and 2027 (depending on the market forecast).

As with similar markets, such as podcasting, we expect to see a few platforms dominate at the top end of the industry and earn the majority of the market share. In the case of Video Ads, these players are:

There are many additional players in the Video Ads market that people are familiar with:

And what about the emergence of Video Ads that is expected on streaming platforms such as:

That’s because as a % of the whole, investment in TV Ads is shrinking compared to Video Ads online.

In between the various video platforms, sits Video Ad Networks who are connected to the publishers and brands that are looking to place/optimize various Digital Ads. The complexity and fragmentation of the market as a whole is why it can be such a challenge to ‘connect the dots’ for the average brand or publisher online.

Yet it is clear that Video Ads is one of the best ways to connect with a new audience or try to build a new community.

Not to be outdone in the market are the creators, who are increasingly becoming more prominent in their evolution of the markets due to their ability to either a) create engaging content for their followers/subscribers b) find innovative ways of advertising for brands, big and small.

Let’s dive into the Video Ads market from top (platforms) to bottom (creators).

If we look at purely revenues from Video Ads based on the figure below, Facebook is the leader, YouTube is #2, and TikTok is #3, although TikTok would be considered by most to be the biggest threat to the other two.

Each platform is performance-based, meaning they charge brands and small businesses based on how Ads perform at what is typically referred to as:

There are other platforms competing in the market for market share, but in most markets there is a Rule of 3s where the top 3 players take the vast majority of the revenues and the Video Advertising market seems to be no exception.

In 2021, Facebook made $115B in Advertising revenue. They don’t break out their revenue growth in the same way that Google (Alphabet) does for Video Ads because YouTube is a separate business to Search Ads.

In their most recent Quarterly Earnings Report, Meta highlighted their ‘TikTok’ copycat known as Reels as a fast-growing Ads product across both Facebook and Instagram.

Factoring in both Instagram and Facebook engagement, the combined run rate for Reels now sits at $3 billion, according to Meta Founder and CEO Mark Zuckerberg.

In 2021, Google (Alphabet) made $210B in Advertising revenue across all its Advertising business units, dominated by Search revenue (70 – 75% of total Ad Revenue).

Similar to Meta, they have been testing out a TikTok competitor known as YouTube Shorts.

In June, Google said YouTube Shorts had topped 1.5 billion monthly logged-in users. After tests earlier in the year, YouTube in September began running ads in Shorts, and starting in early 2023,

In their most recent Quarterly report, YouTube earned $7.07 Billion in revenue from Video Ads, representing a small decline relative to the same period a year earlier. As a % of the whole in Q3 ’22, YouTube Video Ad revenue represented about 10% of Google’s total quarterly revenue ($69.1B).

As TikTok (ByteDance) is a video-only platform, we presume that all of their revenues come from Video Ads. The company earned $4.6 Billion in revenue in 2021.

Part of what makes TikTok unique compared to the other platforms – other than the fact they set the trend for short videos – is that their largest % of users are in the Asia-Pacific region. They have been forced to cut revenue forecasts for 2022, but are expected to generate ~$10 Billion in revenue in 2022. Unlike Alphabet and Meta, they are not publicly traded.

YouTube creators can earn 55% of the revenue from Google-placed ads on their videos when they join the YouTube Partner Program, or YPP.

TikTok is Dominant Among GenZ

As a way to earn higher conversions, TikTok Pulse ads will be strategically placed among the top 4% of all videos on the platform

Very similar to what Spotify is doing with its Audio Ads, Netflix and Disney+ are branching out beyond offering streaming as only a subscription-only service and will soon be offering a ‘Basic’ tier that will include Ads. Apple TV will likely follow suit in the not-too-distant future.

How this will affect the Video Advertising market is TBD, but these platforms introduce a new degree of competition into the market, especially at a time when marketing budgets are frozen or in decline.

There are many other players in this market, but the dominant players take the lion’s share of the eyeballs, and thus most brands prefer to advertise on the dominant platform(s); however, certain niches exist to advertise ‘premium’ or more targeted content, and this is one of the areas where Video Ad Networks shine.

‘Video Ad Networks’ sit in between the brands/publishers and the platforms and coordinate campaigns across multiple platforms in varying formats depending on the goal:

Brands with large marketing budgets will have partnerships with various Video Ad Networks, who will in turn connect them with various publishers who are looking to maximize the revenue from clicks/impressions they get on their various media platforms.

Some of these Video Ad Networks, which would fit under the umbrella of #MarTech (Marketing Tech), are at least partially owned by major marketing firms. These platforms rely heavily on technology to optimize for bidding and conversion across multiple platforms.

Examples of such platforms include (but are not limited to) the following:

The business model of these Video Ad Networks can vary, but they are typically performance-based, offering tiered CPM pricing models based on # of views achieved. Saas (Software-as-a-Service) business models are less common. Some of these networks will bundle creative services into the offering due to their proximity to said marketing firms.

#UGCCreators and The Creator Economy

Not to be outdone in all of this process are the video creators who create a lot of the content for Advertising purposes.

At the top-end platform level, we have seen how the platforms like YouTube and TikTok have programs in place (ie. YPP and TikTok Pulse) for creators that require them to have hundreds of thousands to millions of followers/subscribers on their respective channels.

This incentivizes creators to achieve ‘celebrity status,’ as the difference in monetization potential from being above that threshold vs. below is massive. We saw how the median revenue share for creator programs is 50% across YouTube, Facebook/Instagram, and TikTok.

At the bottom end, a new trend has emerged on Twitter/Instagram/TikTok where UGC (User-Generated Content) freelancers and/or agencies use the #UGCcontent hashtag to coordinate the creation of videos for the purposes of advertising.

Brands love UGC and for good reason — a 2021 study revealed that 80% of respondents said UGC highly impacts their purchasing decisions.

“Unlike influencers who need to grow their community before they start working with brands, UGC creators don’t need tons of followers nor are they obligated to show their face.

Creators (in general) can be seen struggling to monetize in:

Advertising has always been a sort of ‘catch all’ for creative talents. Any of these skills can be monetized in advertising, and that’s why Video Ads is by far the biggest market for creators. UGC Creators is kind of a soft market for advertising, one that doesn’t require ‘influencer status’ and can appeal to artists, photographers, podcasters, and writers alike.

Therefore, we are seeing these types of sub-markets like UGC Creators develop in incredibly spontaneous ways where social media effectively serves as a showcase for different talents, and agents are out scouting this talent for unique faces or tactics that could be used to reach new audiences or communities.

All this leads to an inevitable future endpoint where Video Ads online will be worth more than those on TV … which has already come and gone according to Statista.

When you combine all the forces listed above:

It makes sense that Digital Video Advertising overtook Traditional TV Advertising in around 2021 or 2022. Part of the reason we know this is because major TV networks themselves are under financial pressure due to failing and outdated business models.

A Big Year for Video Creators in 2023

Going forward, there are many forces that will continue to shape how this market evolves:

In this type of dynamic, rapidly-changing market, predicting winners and losers is difficult. What appears near certain is that 2023 will be a big year for creators on video platforms, as the platforms themselves compete for the best talent and users gravitate towards original, independently-created content.

Some parts of this market may end-up playing out like the hit series Succession – board room drama, failed M&A, legacies crushed, and new empires born. It all seems a little Shakespearean in some sense, but at the same time we are still in the middle of a tectonic communications and technological shift.

Individuals have more power than ever to create video content and ‘go viral.’ Yet consequently, competition is more feverish than ever. Brands and publishers sit at one end of the value chain trying to monetize and convert their video assets, while platforms sit at the other end trying to maintain or become dominant. Creators may end up being the big surprise in this market long-term, and tip the scales for the little guy.

Overall, Video Ads are the new default ‘Advertising’ in many ways. With the evolution of technology, particularly in the last 5 years, more and more people are not only consuming Video Ads, but producing them. The market is still fragmented in some ways, and complex in others, leaving room for further jockeying and positioning. As an advertiser, it must feel like kind of a Golden Age á la Madmen.