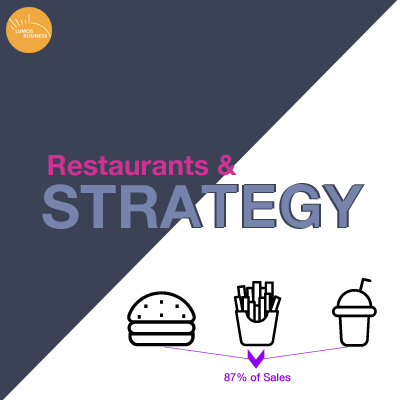 The Founder is a ‘based-on-a-true-story’ 2017 Hollywood film about the rise of Ray Kroc and the McDonald’s empire.

While it a presents many insights + ethical dilemmas, it also offers a unique glimpse into how BMi (Business Model Innovation) emerged around an understanding of the ‘paradox of choice’ psychology.

While many of the ‘business lessons’ from the film focus on persistence, influence, negotiation, ethics, and vision, the essence of the McDonald’s innovation in the mid ’50s can be summarized by ‘paradox of choice.’

Early in the movie, we see a flashback scene to when McDonald’s was a typical drive-in establishment for that era, with delivery to the car + dozens of menu items , which came with two major problems:

The epiphany hit the two original founders in San Bernadino, California when they realized that 87% of sales came from three menu items:

When this realization hit them, they immediately shifted their entire business and took the menu down to those 3 items only.

The new concept wasn’t an immediate success, as customers were not accustomed to such a ‘fast food’ concept – they were habituated to ordering from their cars and eating with more customary cutlery.

The original founders also had to re-order the entire kitchen operations process that – according to the movie – was hashed out on a tennis court using sidewalk chalk.

When they did eventually get the concept up and running, it became a hit. The movie itself centers around the plot between the McDonald brothers and ‘The Founder’ of modern-day McDonald’s franchise as we know it today, Ray Kroc. The ‘seize-the-moment’ event happened only as the Founder realized that the brand itself was synonymous with both ‘opportunity’ and ‘family’ and that there should be a McDonald’s on every corner.

To execute this vision, required many things. Nevertheless, from the perspective of the consumer what it made it so appealing was that you would go to McDonald’s and the Value Proposition at that time was crystal clear:

That’s it! The business focused on a 30s order fulfillment time, which is what made the concept franchise-able.

The Paradox Of Choice & The Modern Menu

It has become quite common in the modern era of food to assume that the more choice and the greater # of exotic options, the better. From the consumer’s perspective, the opposite is true.

Let’s take the average restaurant menu, where you would have hypothetically 4 classes of possible choices (of course in reality there can be nearly an unlimited amount of selection on a menu):

There are thousands of possible permutations that anyone can order. And yet, in most cases, the Pareto Principle would apply if most restaurants did a basic Analytics on what was popular, where about 20% of the items would drive 80% of the volume.

There are always exceptions to every rule, but let’s put the consequences of that ‘finding’ relative to the film in the context of what it means for a restaurant, whether fast food or dine in:

In the case of The Founder, the original McDonald’s brothers focus was on relentless quality control around the burgers, fries, and milkshakes. According to the film, the original burgers had:

Of course, you could add ‘cheeseburgers’ or other variations, but the movie is based on how doing a few things really, really well worked for McDonald’s and allowed them to “revolutionize” the industry at the time. The benefits for the consumer are threefold:

‘In The Business of Real Estate’ not 15¢ burgers

The movie starts to get heated between the two original founders and Mr Kroc at two specific points:

The solution in the film – and in relation to the real story – was when a young man named Harry Sonneborn framed the business at the time in the following way:

“So, to summarize, you have a miniscule revenue stream, no cash reserves, and an albatross of a contract that requires you to go through a slow approval process to make changes if they’re approved at all. Which they never are. Am I missing anything?” Sonneborn

What was the solution that Mr. Sonneborn – who would eventually become the CFO, then the company’s first CEO and President – proposed?

The details of this decision revolve around the original contract Mr. Kroc signed with the founding brothers and the fact he was basically illiquid at that point, plus the fact he had no real leverage over franchisees at that time to enforce quality control (ie. no lettuce in the burger!).

At that point, McDonald’s started buying the land and leased it back to franchisees. This was the moment the business soared. Nevertheless, to make this particular moment come to fruition required Mr. Kroc and Mr. Sonneborn to go around and pitch investors to get the capital to fund land acquisition. What advantage did they have on their side?

In addition to the fact that McDonald’s was red hot at that moment, with franchise demand booming across the nation, is that the concept was simple to explain – Burgers, Fries, Shakes, and a family atmosphere – at least back then!

The McDonald’s Franchise Realty Corporation was launched in 1956 with the goal of purchasing cheap property along well-traveled byways for eventual McDonald’s concept franchising.

Not every restaurateur should start tearing up their menu and looking to sweep through their whole kitchen. But there are lessons that are key, especially with all the headwinds modern-day restaurateurs face:

First of all, paying attention to the top selling items and understand the Unit Economics of those items in depth:

Part of the challenge for the modern-day food industry is all the allergies and intolerances, which itself requires offering many more options than even 10 years ago. That is a part of the necessary complexity in the modern era. The key is to sift through data, test ideas, and strategize to determine what complexity on the menu is unnecessary because in all likelihood it overwhelms consumer and creates losses for the business.

What is the magic # of menu items/choices to offer? There isn’t one!

Each restaurant in each city or town must adapt to local conditions. But The Founder shows us a very specific case study of how this principle can play out to either unlock a new brand or revolutionize an industry. The conditions between then and now are obviously massively different, but the same principles apply!

Overall, The Founder is a great entrepreneurial movie and business case study. ‘87% of sales from 3 items’ was the original epiphany, a phenomena that can be explained by the paradox of choice and how in many instances, less is more in the restaurant industry.