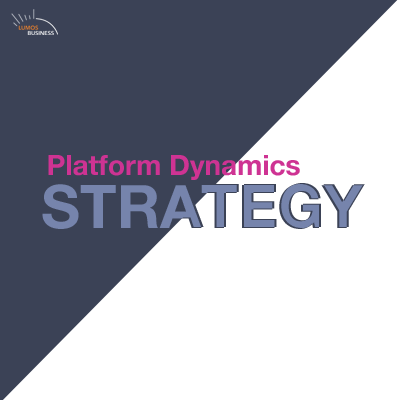 The more that business models shift online, the more the underlying economy is affected by ‘platform dynamics’ and the business model innovation (BMi) associated with those dynamics.

Before the platformization of the economy in fundamental areas such as financial services (Fintech), housing, fashion, food, and others, business models operated in a linear fashion. The inputs were linked to the outputs, as the concept of non-linear, exponential growth on the back of network effects.

Digital platforms themselves enabled network effects, globally, as the barriers to reaching consumers were lowered dramatically with the rapid growth of the internet. Network effects enabled non-linear, parabolic growth models, which has led to new economic models that stretch from private companies into the broad economy.

Most of what drives the strategy surrounding platforms is Power Laws whereby a significant amount of early-stage funding is raised in order to gain market share (ie. market penetration) in what in most cases are nascent markets. Market Penetration is the key first lever of Platform Dynamics.

The first step towards achieving a dominant platform in any market is to gain market penetration. There are arguments on both sides of the coin about whether or not companies should embed business models into their core product from the start or not (subsidized vs. paid), as we have seen many companies succeed from both angles.

Companies like Paypal (via $20 Referral incentives) Facebook, and others, relied on heavy subsidization of the user economics in the early stages to penetrate their respective markets, before they later switch on a strategy that drives revenue growth. Other models like Airbnb, Afterpay, and others find favourable unit economics in early-stage markets and raise capital to ‘blitz scale’ and penetrate markets as quickly as possible.

Once there is a significant enough number of early-stage users (relative to the overall size of the market), network effects can kick in. This can manifest in a number of different ways.

For a challenger bank like Chime in the U.S., they had 70% of their new users come from referrals. Transferwise estimated that 80% of their growth was driven by word-of-mouth and referrals.

We often hear about ‘growth hacking’ as an industry to help drive network effects for new platforms. Airbnb famously used the ‘Craiglist Hack‘ to help drive traffic to their listings.

In any respect, the goal here is to drive growth through the network. Incentives can be added (ie. via referrals) but the goal is to go exponential via non-paid channels.

A lot of what we see in Series A – D fundraising rounds from Venture Capitalists (VCs) and other firms is budget allocated to ‘Sales and Marketing.’ After a company has achieved product-market fit and has a substantial enough user base, it is often possible to see the broad strokes of User Economics and develop basic calculations around ARPU (Average Revenue Per User), CAC (Customer Acquisition Cost), and LTV (Lifetime Value).

When a company begins to invest significant money into ‘Sales and Marketing,’ what they don’t want is a negative return. The don’t want to be losing money (net) over the investment to acquire customers, especially since CAC generally trends upwards as competition in a given market increases. Rule of thumb is to target 300% LTV (or 3X).

Farfetch has demonstrated a great example of how this strategy plays out over time.

A lot of what we are seeing now in the world of platform dynamics is their connection into the real world.

One specific example is retail (or ‘new retail’) where we see the emergence of the ‘omni-channel’ model between eCommerce and in-store sales. Companies like Farfetch in the fashion world and upstart e-Grocery players in the food world are tapping into digital-physical applications to add new customers, develop new products, and create new revenue streams.

Building on top of that is the BNPL (Buy-Now-Pay-Later) model by players like Klarna who are offering hybridized BNPL products (Try Before You Pay) that enable customers to buy clothes online, try them on at home, and return them without payment in 30 days if they are unsatisfied.

Additionally, others in the space like Afterpay have created their own ‘virtual cards‘ that allow users to pay in-store on their digital wallet, helping to close the loop between physical and digital shopping experiences.

Try Before You Buy is similar to the old consignment sales concept that used to exist in boutiques, where VIP customers could come to the store, select items, walk straight out and pay for the items they kept at the end of the month.

Fundamentally, most of the more successful online-offline products/features tap into some type of consumer behaviour in the past that can be made simpler or more efficient with technology.

As we see platforms scaling in markets that are fundamental to national economies – financial services, housing, etc – we see that regulatory barriers start to become bigger and bigger factors, despite the fact that the platforms themselves operate digitally and do not rely on any physical infrastructure.

We have seen companies in Fintech like SoFi and Brex applying for U.S. Banking Charters. Despite being multi-billion dollar brands with large war chests, they simply can’t expand globally until the timing is right from a macro, strategy, and balance sheet perspective (amount of funding in the bank).

Whereas companies like Airbnb and Uber expanded their ‘sharing economy‘ models during a time period when regulatory/legal structures were not in place to modulate growth. Those companies and their peers could expand into new markets with zero or limited regulatory influence, thus becoming global brands at lightning speed.

The need to get licenses/charter or acquire customers who are themselves part of a licensed body (ie. accountants or real-estate agents) is a large cost item in the evolution of platforms, but also becomes a large barrier to entry for future competitors trying to operate a similar model.

The net result is a captive audience where switching costs are prohibitively high, whether from a monetary or time perspective, or both.

We have seen this with Shopify for example, which now has more than 1.7 Million merchants worldwide. What was once a simple eCommerce platform for small businesses with a two-pronged business model (subscription and merchant services). has now become a full-on platform with new products launching such as Shop Pay to enable a seamless payments experience at checkout, Shopify Balance as a business banking solution for its merchants, and a suite of other products.

Within those product offerings, they have partnerships with companies like Affirm as a credit provider for BNPL Financing products, creating a full ecosystem of financial-services products for its merchants, either directly or indirectly. For merchants to ‘switch’ platforms thus becomes progressively more difficult as time goes on, and Shopify can continue testing and rolling out new products/features going forward.

Another example is Airbnb and their ‘Monthly Stays‘ now becoming a key part of the business model (nearly 25% of bookings last quarter were for ‘living’ or stays of more than one month.). In what many refer to as the mid-term housing rentals market (stays from 1 – 6 months), with many companies globally trying to take on Airbnb in what is effectively the rental market, Airbnb has a captive ecosystem of hosts, residential real-estate firms, hotels, and others that they can use to grow their market share in this emerging category.

For many of the world’s largest and most successful platforms, profitability has never been the end game. They continue trying to expand their influence and use economies of scale generated from the platform model to move into adjacent markets. Rather than returning capital to investors as dividends, as was the tradition in previous bull markets, these types of ‘disruptors’ continue to push capital back into the business in order to generate increasingly more return.

This type of ‘return’ is generally reflected in share-price increases, and it is why many of the biggest gains we have seen in the market have come from platform-based businesses in the last 12 – 15 months since the onset of the pandemic.

The ‘Flywheel’ refers to the effect of adding more spokes to the wheel, which in turn generates more positive results for the business – whether from a customers, cashflow, or market share perspective – as the wheel turns progressively more. Below is an example from SoFi.

To reach this level where the Flywheel kicks in, a business must have reach some point of ‘dominance.’ That’s because if even one of the spokes is held on to too weakly, a competitor coming and taking it out could in turn effect the entire business model. Any weaknesses in any pillar of the underlying core of the business can cause ripple effects that take down other pillars.

The ‘self-reinforcing’ concept in relation to business models helps entrepreneurs and executives visualize strategy over a longer time horizon, whereby small moves by any given firm that are positioned well in advance of big macro shifts in the market can become big wins for firms.

One example of this recently was SoFi’s acquisition of Galileo for $1.2 Billion in April 2020, at a time when the market was reeling from the early-stage uncertainty of the pandemic. Now the Galileo platform – which acts as kind of a ‘cloud’ for Fintech banking, trading and payments platforms – is not only a key part of the SoFi business model, but also a key piece of infrastructure in the global Fintech market.

And finally we see capital efficiencies at the end of the Platform Dynamics spectrum, where returns for investors are high relative to other comparables in the market.

There are two reason for this:

For investors who bet big in early funding round (Series A – D), the risk is very high that the firm will fail before reaching any sort of ‘maturity’ in the market. By the time a company reaches this level, it is usually at or near the level of IPO/Direct Listing to the point that deeper-pocketed institutional investors can model out the business and measure projected returns on a mid to long-term basis.

This doesn’t mean the business itself is near maturity and that returns have flatlined. To the contrary, we have seen many businesses that were once platforms at this stage now dominating the S&P 500.

Overall, this post looks at a rough spectrum of the platform dynamics that are in play for many of the world’s leading platformized brands and the strategies that surround them. While never easy to replicate the success of the best, there are always lessons to be learned along the way from studying their business models and corresponding strategies.