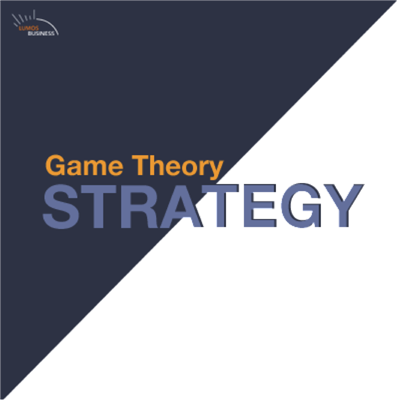 Game theory is an application of statistics and probability to try and determine what the other player(s) is most likely to do next. When trying to make your next strategic move, game theory provides a framework to estimate potential outcomes using a mix of mathematics and intuition. In this context, we will focus on the application of game theory in a strategic context to innovation markets.

You may have heard the expression ‘moves and countermoves‘ in the media or films such as The Hunger Games. In essence, this is what game theory is all about. In dynamic, rapidly-changing environments – such as a market where innovation is happening at a rapid pace – game theory helps translate a maze of ambiguity into a set of probabilities and potential outcomes.

Game theory was pioneered by Princeton mathematician John von Neumann in his 1928 paper. It was later augmented by another Princeton mathematician named John Nash, who famously created the Nash Equilibrium in his 1950 Ph.D., for which he would go on to win a Nobel Prize some forty years later. Among the most well-known applications of the Nash Equilibrium is the Prisoners’ Dilemma.

Two suspects are questioned separately, and each can confess or keep silent. If suspect A keeps silent, then suspect B can get a better deal by confessing. If A confesses, B had better confess to avoid especially harsh treatment. Confession is B’s dominant strategy. The same is true for A. Therefore, in equilibrium both confess. Both would fare better if they both stayed silent.

In the above example, you can see that the dominant strategy for both prisoners, in the game theory context, is to confess; however, if one prisoner was to confess and the other was to deny, then one would receive a harsh sentence and the other a very light sentence. It is possible that both prisoners deny and each gets a very light sentence (or possibly nothing at all), but game theory helps us see the psychology of each prisoner when under interrogation.

They don’t know what the other will say, so they have to be very careful about being caught in a lie, as their sentence would double.

The applications surrounding game theory and the Nash Equilibrium have since expanded into several different realms of economics, mathematics and social science. At the heart of it is the idea that there exists some kind of equilibrium in a given game/environment/market, and from that equilibrium, a dominant strategy emerges.

Sometimes one person’s best choice is the same no matter what the others do. This is called a “dominant strategy” for that player. At other times, one player has a uniformly bad choice—a “dominated strategy”—in the sense that some other choice is better for him no matter what the others do. The search for an equilibrium should begin by looking for dominant strategies and eliminating dominated ones.

The elimination of dominated strategies is commonly used to simplify the analysis of any game. The way to proceed is to eliminate for each player every strategy that seems ‘unreasonable’, which will greatly reduce the number of equilibria.

The War for the Mobile Market – Apple and RIM

A good example in modern history, in relation to innovation markets, is the story of the mobile market and Apple and Google’s respective rise to market dominance over the incumbent at the time, Research in Motion (RIM).

In late 1999, RIM launched its infamous Blackberry 850 device (soon-to-be-named Crackberry for how addictive it was) and kicked off the ‘smartphone’ segment.

Blackberry devices started to fly off the shelves. The combination of a handheld, mobile device capable of sending texts and emails from a physical QWERTY keyboard propelled the company to king-like status; the Canadian-based handset manufacturer’s phones were more than just mobile devices, they became a status symbol in business circles. By the end of 2005, they were shipping over a million phones and had 7% of the global market share.

By the mid-2000s, Nokia was in decline due to their lack of innovation and inability to produce a pure smartphone. Motorola had produced some good devices, but it couldn’t compete with Blackberry on key functionalities. At this point in history, Symbian OS (operating system) was being used to power these competing operating systems. Symbian OS was a joint venture between Nokia, Motorola, and Ericsson; all 3 smartphone makers were therefore limited by the functionality of the OS.

One of RIM’s clear competitive advantages was the fact that it had built its own proprietary OS; there were no limits on what features and functionality it could add to its smartphones. At this point in history, however, most companies were still very much focused on the hardware, not the software. That would all change dramatically in the next two years.

In July of 2005, Google acquired a little-known company called Android for $50mn. At roughly that same point in history, Apple had started its own secret project for what would become the iPhone. This is where we have a concrete example of game theory in action. Apple (and Google) knew that building on top of the Symbian OS was a fruitless venture.

They were looking at the explosive success of the Blackberry and the long-term potential of the smartphone market and decided to build their own proprietary iOS for the iPhone. Building a new OS platform was Apple’s dominant strategy.

When Apple officially launched the iPhone and entered the market in January of 2007, RIM was still gaining market share. In fact, it wasn’t until Q1 of 2009 that their market share peaked at 20.1% of the global smartphone market. One could assume that RIM’s dominant strategy in 2007 was to stay on their current OS platform.

But history would prove this to be the wrong strategy. There are countless blogs, articles and case studies about what happened to RIM from their peak in 2009 to near collapse in 2016. But it all hinged around their response (or lack thereof) to the iPhone.

The comparison of RIM to Apple is a more apples to apples comparison than RIM to Google because both RIM and Apple produced premium, high-margin handsets, while Google’s open-source strategy was built on being low cost and gaining market penetration as quickly as possible. Eventually Android replaced Symbian.

By the time that RIM figured out what the iPhone was – a mini-computer, not a phone – it was too late. Their half-hearted attempt to build a new OS (Blackberry 10) in 2013 was about 5 years too late. By that point, Apple had gone from 0 to 20% market share, a parabolic rise that paralleled RIM’s early success itself. The decision to develop a proprietary platform to compete with Apple was also the wrong strategy, as it cost the company large amounts of time and money, and also hurt the Blackberry brand.

At the time Steve Jobs launched the iPhone in 2007, Apple had a market cap of ~$80 billion – it is now north of $1 trillion, the majority of which has been driven by iPhone sales globally. In 2008, RIM had a market cap north of $80 billion, and today their market cap sits near $3 billion. As we can see, this was a very high-stakes market where hundreds of billions were on the line. Apple’s strategy, while simple to analyze in hindsight, was right and RIM’s was wrong.

Overall, game theory provides a relatively simple tool to help break down complex markets and innovation landscapes. Rather than looking at markets in isolation, history shows the importance of analyzing all the pieces on the board and understanding their dominant/dominated strategy. Making masterful moves and countermoves are made easier thanks to game theory.