Strategy Defined in the Digital Economy 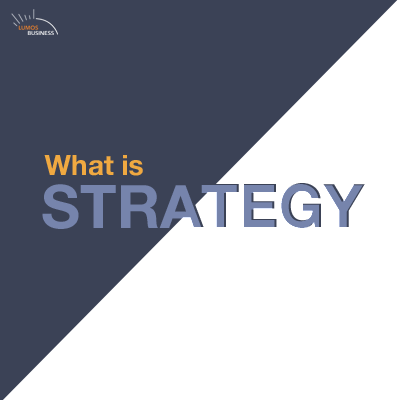 Searching for an acceptable definition of what ‘strategy’ is is difficult nowadays, especially in an increasingly digital economy.

Strategy, strategy, strategy. Everybody’s favorite business noun and adjective to frame narratives, there is no shortage of strategic planning sessions happening nowadays. But in many ways, the word has lost its meaning in the modern business world – so what is strategy?

It’s not meant to be metaphorical or theoretical – it’s meant to be actionable as if strategy were a verb, and intelligent as if strategy could be made tangible. That’s why we are going to dig into frameworks of old and new and come up with an idea as to what strategy means for 2020 and beyond, as the digital economy takes shape.

(Arguably) The Top 3 Strategy Frameworks in the modern MBA context are:

Borrowing from a 2015 HBR article – What Is Strategy, Again? – the following is interpreted as a synthesis of Porter’s 5 Forces into a working definition of what strategy is:

(Arguably) No decade in modern history, however, has brought more ‘disruption’ to markets than the 2010s. The ‘disruptors’ – including the likes of Google, Airbnb, Uber and a host of others – have leveraged the dawn of digital technologies and access to billions of dollars in cheap capital to overthrow entire industries.

Whatever you make of these companies now – whether from an economic, social or moral perspective – it’s hard to argue with their strategy. And very few, if any, of those strategies were formed in traditional ways.

These companies don’t only invent something to sell us. They are not making products or services that just incrementally improve on whatever came before. They don’t sell us better. The most exciting companies sell us different. They introduce the world to a new category of product or service

To literally change the way that we think about something requires a culture of brazen risk-taking, huge amounts of money being invested, and a series of external changes in the market to open space for the ‘disruptors.’

Digital networks accelerate this, and that’s why we have seen such massive shifts in industries such as tourism, transportation, advertising, and others in such a short period of time. The goal is to dethrone the incumbents and the rewards for those involved are orders of magnitude higher than a cushy job in a Corporate.

While working on our book, we analyzed data on U.S. venture capital–backed tech startups founded from 2000 to 2015 and found that category kings earned 76 percent of the market capitalization of their entire market categories.

But disruption as we know it is more of an outcome than a strategy. Even in an era of accelerated growth, achieving the status of a category king takes a decade – give or take – and plotting out a strategy over the course of a decade is a dynamic, constantly-shifting process.

It’s hard to imagine Brian Chesky (Airbnb), Travis Kalanick (Uber), even the pseudonymous Satoshi Nakomoto (Bitcoin) sketching out a Porter’s 5 Forces Diagram or a Blue Ocean Canvas in their apartments before they made it big. Chesky and one cofounder Joe Gebbia studied design at the Rhode Island School of Design (RISD).

Kalanick was a self-taught coder who dropped out of his courses at UCLA before starting his first company, Scour. And while we don’t know who Satoshi Nakomoto is, it’s safe to say that he or she probably knows some code and was unlikely to be launching one of the most disruptive pieces of code in history from the lecture halls of a famed Business School.

Oft-cited playbooks from the category kings include:

What elements of strategy underpin the thinking within these playbooks?

Therefore, new entrants (often founded by frustrated ex-employees of the incumbents) with little or nothing to lose when they enter the market. Initially these small upstarts don’t pose a threat — the new entrants find new markets to apply these technologies largely by trial and error, at low margins. Their nimbleness and low cost structures allow them to operate sustainably where incumbents could not.

Given that markets are becoming increasingly ripe for disruption – not less – it begs the question, what framework(s) should we apply to strategy creation as we move forward?

Strategy – Where is the Data?

The commonality between any strategist nowadays – old or new – analyzing any new move or direction is two-pronged:

The amount of data we have available – on customers, markets, suppliers, etc – is unprecedented and having a major impact on how strategy is defined. Analytics, metrics, big data, machine learning (ML) and artificial intelligence (AI) are all rapidly-evolving fields around data that will come together to redefine strategic decision-making.

Before arguing which framework(s) are best in this context, it is perhaps better to define both the values and goals that underpin any strategy first, as:

In the modern era of ‘startups’ it is common to hear proclamations like ‘we want to be the Uber of X.’ Or companies take a vowel or two out of a word commonly used in Y industry – ie. real estate, realtr – and disclose on their homepage that said industry is dead as we know it. Neither are actually strategies nor do they really work.

What does work, generally, is committed entrepreneurs who are typically early in the market and grind out a strategy over several years (on a shoestring budget) until they achieve product-market fit. Some set out to dominate a market, others want to be a major player in the market, and others simply want to make money and profit from the market.

The story of Lyft (#2 to Uber) comes to mind. The company was started in 2009 (Zimride) as a long-distance intercity carpooling service for students on campuses. It wasn’t until 2012-13 that the rebranded Lyft became legitimized, thanks in large part to the rapid rise of Uber.

Uber vs. Lyft – How did Lyft craft their strategy?

Lyft’s strategy was directly correlated to the breakneck growth of Uber. Uber was founded in 2009, raised its first major round in Q1 2011 and grew at breakneck speed from there. Whether Lyft’s founders were reading Porter’s 5 Forces or Blank’s 4 Steps to the Epiphany on their lunch break is unknown, but what is known is that once they saw Uber’s success, they rebranded and changed their business model (2012) to the commission-based structure pioneered by Uber.

In this case, we could argue that Uber’s strategy was derived internally and executed flawlessly, while Lyft was forced to adapt their original strategy in response to an external stimulus. Both companies, in the long-run, were successful from an economic perspective.

Uber has clearly won the game in the US with more than 70% of the market. Lyft has a respectable market share around 27%. And smaller players split the remaining 1.7% of the multi-billion dollar market.

The incumbents clearly failed to recognize what the data showed in even the earliest days of Uber and Lyft’s ascension to market leaders in the newly-formed ridesharing category – that the majority of customers were sick of the taxi experience.

Whether it was the poor user-experience of having to dial a number to reach a taxi, long wait times, poor load management, smelly cars or even watching the dreaded meter during a trip, what Uber and Lyft saw in their early days was data that dictated demand and a massive future market.

The taxi industry, collectively, has lost massively, and interestingly the rental car industry – as an adjacent market – has also seen dramatic declines in volume.

We recognize that there are many issues around regulations, ethics, compliance, and labor laws for Uber and Lyft that will need to be worked out going forward in the industry. But from a purely strategy perspective, ridesharing is a substitute for taxis and rental cars and consumers have made their choice. The data speaks to their preference for a more fluid, technology-driven experience, where drivers are rated and payments are automatic.

Taxis still exist. So do rental cars. Autonomous vehicles will exist in the future. The combined markets are huge, and now with Uber and Lyft in the industry, incumbents across the automotive and transportation sector are preparing themselves accordingly.

Modern-day upstarts can easily spin up a website, app or even just a Typeform to collect data about their assumptions around the future of any industry. But they can’t execute unless they bring in the talent, capital, and requisite infrastructure. Therefore even the best-laid, data-backed strategy is unlikely to succeed for the majority of startups.

For incumbents, there is a window of time where the advantages of having capital, infrastructure and the ability to bring in new talent can be spun together into a strategy where they can defend against disruption, or even better, adapt and become more profitable because of it.

But they need data á la the disruptors about what’s missing, where the gaps are, and what needs to be done to fill the gaps. Many companies mistakenly believe they can use their balance sheet to snap up companies (cc: Yahoo) and fill the gaps. It’s a very ineffective strategy in most cases.

Because any strategy that is deployed into the market creates ripple effects and competitive responses – whether from upstarts or incumbents – the key is to combine both data and talent into the decision-making process.

Relying ONLY on the intuition of a CEO OR a series of data points in isolation is a recipe for trouble. The key is to bring the data to the surface in the form of a few key metrics and bring in the talent that can use those metrics to shape a strategy into a tactical set of movements.

Bringing together all of the above, it seems that the best way to approach strategy is to blend methodologies from Column A – the Harvard Academics and MBAs – and Column B – the coders turned disruptor and entrepreneurs.

There is something to said for a strong blend of experience and theory that is gained by executives over time. But there is also something to be said for savvy, data-driven dropouts whose mission in life is to overthrow the incumbents.

Therefore, it’s not so much the tool that is important, but how the context is framed. The world we live in has become much more complex, and the enterprises within those markets have to deal with threats and opportunities from all angles.

Technology, talent, capital markets, and distribution channels are variables that change faster than ever. The dynamic nature of business means that traditional defense mechanisms don’t work and customers are increasingly willing to become early adopters in upstarts, especially in the younger generation.

As a result, the context needs to be framed around an assumption of radical change. From there we recommend to:

Strategy is an action to survive and profit in the new wave of disruption. It is not a process to bring Boards together or an exercise in theory. It is a set of movements towards clarity; decisive steps in uncertain environments to mitigate risks, counter competitive threats, and seize new opportunities.