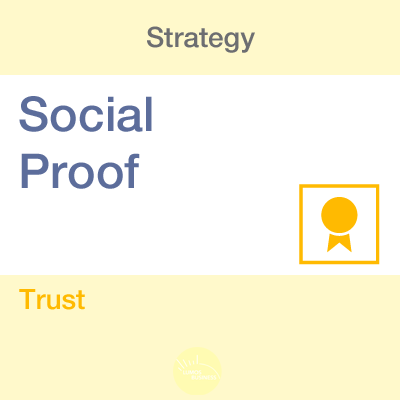 Social Proof is the trust built in a brand or individual based on what others say about it.

It could be customer testimonials/reviews, a celebrity endorsement, an expert’s stamp of approval, an article in the media, or a massive crowdfunding campaign.

How is social proof linked towards the strategy of starting a business?

The link is between the idea, whatever future forecast exists for the business, and the best way to use some form of social proof to accelerate that forecast.

How is social proof linked towards growing an existing business?

A lot of modernized Conversion Rate Optimization (CRO) for eCommerce companies relies on how to present the requisite social proof in the best possible way to increase trust in the brand. Consequently, the goal is to increase conversion.

A Social Proof Strategy for Startups

What we see when we observe the patterns of a lot of startups and new business ventures is an over-investment in either time or money in one or more of the following prior to product-market fit:

In the end, all three are directly related to one another, as the product has to be at least designed visually to drive sales, and investors will want to typically see revenue + growth before investment. Most individuals can’t self-sustain a business without additional funding, and so it becomes a vicious circle.

Imagine that the initial goal – based on some form of business model prepared using any of of the tools in the Business Model Toolkit – was oriented around social proofing:

For each of the following, we provide an example of this from in-the-wild (real life) and how it worked out.

Native ‘natural deodorants’ was founded in 2015 by Moiz Ali and was acquired by P&G for $100M USD without ever selling a single stick of deodorant outside of their DTC (Direct to Consumer) website.

By his own admission, Moiz knew almost nothing about the deodorant space when he founded Native – but he did know a little about business, and a lot about people.

They were hyper-focused on customer reviews.

Customer feedback was not left to a passive inbound email address, but actively pursued through email and social media outreach. The 15,000+ 5 star reviews which today feature prominently on the brand’s website a legacy of this early willingness to test and learn.

These same reviews still feature prominently on the company’s website, which now features new categories of products within the ‘personal body care’ vertical.

More on the ‘social proof’ of reviews for established eComm’s below, but for now, the strategy lesson is relative to how the original founder was hyper-focused on customer reviews as a CPG (Consumer Packaged Goods) launching a new product. He didn’t sell a single stick wholesale, and in the end, he walked away with a cool $100M in two years for his efforts.

The most common place to see the ‘expert stamp of approval’ as a social proof for startups and new businesses is in the CPG (Consumer Packaged Goods) sector through outreach to different types of experts depending on the product. Examples include:

The more common strategy for technology companies is based around using an ‘expert stamp of approval’ by showing what people from other companies (or investors) are involved in this company, as a way to create trust.

In this case, the Transferwise homepage started with ‘From the People Who Built Skype & PayPal,‘ two of the most prominent tech successes in that era (~2012).

But the original was simply that ‘people from Skype and Paypal are building this new forex payments system,’ which helped establish consumer trust in a market where a lot of it is needed.

Revolut is a somewhat controversial, very aggressive digital bank who are the true definition of a ‘challenger bank‘ because they test the limits with everything they put out.

The startup opened pre-registrations for the campaign on Monday, with the aim of raising £1 million once the campaign went live. Would-be investors have smashed that target, pledging £10 million in just 10 hours. By Tuesday evening Revolut had £12.9 million pledged from over 6,600 investors.

The previous record was £3.99 million for another fintech called GoHenry, which had happened about a month before Revolut launched. In the end, Revolut opted to only take the first £1 million.

Revolut’s original strategy was all about community. They farmed the initial ‘social capital’ they built with their community to raise an important equity crowdfunding round. It is necessary to note that Revolut syndicated the round with VCs at this juncture, which is not uncommon.

That additional ‘investor proof’ helped boost the validity and valuation for Revolut, but it isn’t essential to have VCs in order to raise a successful equity crowdfunding rounds. In some cases, it can even be detrimental depending on the market and who the crowdinvestors are.

The good news is that unlike other methods of social proof, the equity crowdfunding investors made bank off of this round, earning 1900% in just two years.

Equity crowdfunding is time and resource-intensive, but in certain cases it is a better strategy than chasing more traditional or institutional investment capital. Community size and loyalty are the major factors to assess, in addition to the various regulations and platform rules in each jurisdiction.

CRO (Conversion Rate Optimization) is all the rage these days for eCommerce companies, as it is the emerging ‘science’ of how to place what elements – where – in order to increase trust and thus conversion. Naturally, it is not exclusive to eCommerce companies, but it is where we see the majority of the conversation these days relative to CRO.

There are numerous studies and data points to demonstrate how important reviews are to consumer’s decision-making process around what products/services to buy.

88% of consumers trust user reviews as much as personal recommendations.

# of Reviews Before Making A Purchasing Decision

How much does customer proof matter?

Do the Majority benchmark reviews before purchasing?

57% of consumers will only buy or use a business service if it has at least a 4-star rating.

The major theory in relation to eCommerce is that placing social proof in the right places on the main pages can make a dramatic difference in conversion %. If this rule applies to eCommerce, we would expect that it would apply many other places online as well.

There are many, many new agencies specializing in CRO (Conversion Rate Optimization) or at least stating that they do. Either that, or CRO is a bundled service provided by those agencies who have worked with a lot of eCommerce companies in the past.

How to determine who is the best – or what the best practices are – is difficult at best, as there is always a level of subjectivity in a field like this that is more based on behavioral science than anything we would consider more of a hard science like physics or math.

Nevertheless, if you look at certain hashtags or accounts on Twitter, you can see some of the experts posting their ‘ideas’ on how to make CRO better for one particular brand or another.

3 Dimensions of Social Proof – What, How, Where

As we have seen in this post, there are three dimensions of social proof:

There is no doubt that social proof is at least somewhat necessary in the modern digital age to increase trust at different points in a company’s lifecycle. For startups, the solutions look different than established brands.

As always, there is a nuance and personalized approach required to test different strategies and analyze (ideally with data) the results to see what works best.

Blueprint – The Art of the Two Year Exit