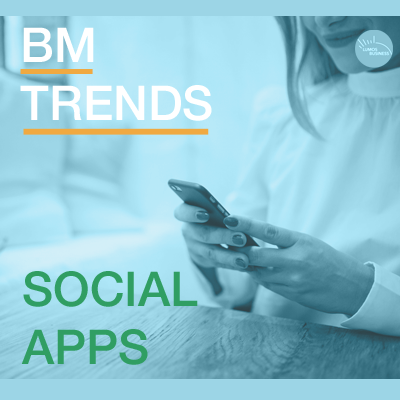 Phase 1 was MySpace. Phase 2 was Facebook. Now we are entering Phase 3, where a sense of authenticity and connection reigns supreme over click-bait, likes, and followers.

A set of new Social Apps are leading Phase 3, but the question is what will the emergent Business Model Trend be?

Who wants to be the next Clubhouse?

On one hand, you have a network that caught the world’s attention in a way that rivals Facebook’s earliest days in a matter of months. On the other hand, they plummeted into obscurity months after that.

Clubhouse is still around, yes, but their growth rate has collapsed, relatively speaking. The 86% drop YoY in downloads back in Q1 ’22 sounds bad, but that’s because they were growing at such insane levels in Q1 ’21.

Davison described Clubhouse’s “hype moment,” during which the app grew users 10x month over month and took the No. 1 spot at the App Store in Japan, Hong Kong, Russia, Germany, Brazil and Italy.

Clubhouse had so much growth that within months there were Developers piling in to try and build that all-important “apps” layer that has been the hallmark of success on other social networks. That shifted Clubhouse’s own internal focus towards developing an API, which created all sorts of additional issues around security, etc. Their strategy didn’t work.

So, do you want to be the next Clubhouse or not?

That level of hyper-growth, combined with the right model, could have turned Clubhouse into some kind of a TikTok-like phenomena. Instead, the emerging ‘social audio app‘ was caught between two models:

Clubhouse was dabbling in both sides. Their meteoric growth in late 2020 and early 2021 was enough to get them to a level where major corporates, celebrities, and influencers were experimenting on their platform. Very quickly, Spotify and Twitter launched copycat products and suddenly Clubhouse wasn’t getting those really cool, spontaneous conversations happening on their platform.

The conversation itself is critical on social. But those that drive the conversation need the right incentives, and 18 months after Clubhouse exploded, it feels as though we might be on the cusp of discovering what that Social3 business model is. It can’t be corporate ads/sponsorship.

Convergence on social media going forward points to less ‘media’ and more ‘social.’ This means make it happen IRL (in real life) instead of just chatting endlessly online. Social benefits can come in the form of new friends, a date, and/or a sustainable revenue stream.

Much of Social Phase 2 has focused on the Creators/Influencers and creating addictive tech to help them scale to millions of followers/views worldwide. For some, this has translated into a pseudo celebrity status. For others, a series of paid promotions for major brands. But for many, it hasn’t translated into much monetarily relative to the level of engagement they have created on these platforms.

There are Power Laws on social networks that mean the top ~5-10% of accounts drive 80-90% of engagement. If those same accounts got paid relative to what they produced, they would be making major money – yet they don’t. Social networks themselves make $Billions on Ads. Right now, the majority of the Creator/Influencer value is captured by the social networks in the form of advertising dollars.

A lot of Web3’s future value premise was based on the idea that adding tokenized incentives were the future of digital communities. The problem is that a lot of Web3’s future promise has been plagued by its current problems – with technology, with its brand, with a series of ponzis.

Social Phase 3 will undoubtedly incorporate certain dimensions of Web3. If Future Trends point to IRL Benefits then there will need to be proper financial incentives built into these networks. Wherever there is the need for financial incentives requires embedding the payments stack in some way – whether it is either Fintech or Blockchain (or both) payments that are embedded.

The high fliers in the moment – who are leaning away from ads – will need to experiment and hopefully crack the right model. If there is a lesson to learn from the Clubhouse collapse, it’s that capturing the moment is critical. Working with the core influencers/creators to co-create a monetization model is the right strategy. Academic approaches to a scalable monetization strategy will be thwarted by the major networks – Facebook, Twitter, Snap, etc. – who can spin up a team to build a replica model overnight if something new is working.

BeReal seems to have this focus, and maybe since culturally France is so much different from the U.S., the development of the business model will skew towards the creative side.

However, investors are urging BeReal to introduce new features that can help it avoid becoming a “one-hit wonder” like other faddish social apps, such as Houseparty or Clubhouse.

As the company is spending $7+ per acquisition on U.S. campuses at the moment, this gives us some kind of idea what the company will need to net back once they decide to turn on the taps in the future.

Overall, various trends have negatively impacted the business models of Phase 2 Social Media giants in 2022. Now, a new era of Social Apps are emerging and capturing the imagination and attention of the youth. Now, the major work to create a new business model or two begins at scale.