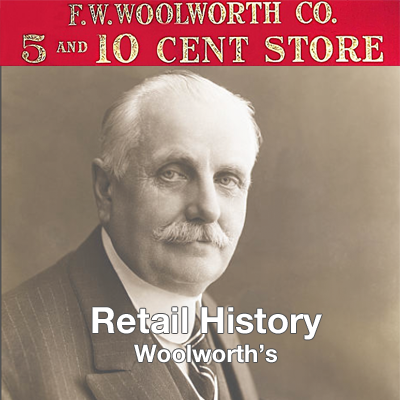 Born in 1852, Frank Winfield Woolworth (F. W. Woolworth) radically reinvented retail in the late 19th and early 20th century, becoming one of the most revered entrepreneurs in American history at the time of his death in 1919.

The Birth of an Iconic Brand

Naturally not without his critics, Frank Woolworth nonetheless rose from the bottom of a rural New York State ‘dry goods’ store to build an empire of ‘five-and-dime’ stores with a head office at the tallest building in NYC.

Department Stores only existed in a few big cities, but “five-and-dimes” were an emerging concept in the late 1870s. The ‘Five-Cent Counter Craze‘ had sparked his interest. Keen to get into the game himself, he borrowed $300 and opened his first five-cent store in Utica, New York, in February 1878, which promptly failed. He then opened up another store in April 1879 in Lancaster, Pennsylvania – this time with an expanded section to include 10 cent items – and so began the Woolworth’s empire.

Frank Woolworth’s strategy was to expand his retail footprint by opening multiple locations, buying items in bulk (increasing profit margin), and eventually squeezing suppliers similar to how modern-day bulk retailers achieve more control in the market. When he would squeeze a competitor out of the market, he would often buy them out.

The company was making money hand over fist. The F.W. Woolworth skyscraper in NYC was bought for $13.5 Million in cash in 1913. By the time of his death in 1919, the company was worth more than $65 Million with more than 1,000 stores across the US, Canada, Ireland, and UK. Despite the turmoil of War, a deadly pandemic, and general strife, the Woolworth’s empire had thrived through the creation of an international network of five-and-dimes, servicing the public with cheap goods, attentive service, and a seemingly ruthless founder who squeezed suppliers to increase margins.

Coming out of the 1st World War and on the heels of the death of the founder, you might have thought that Woolworth’s would be reeling a bit, but they hit the gas in the Roaring ’20s and more than doubled their footprint through rapid expansion across Britain, Ireland, and the creation of a subsidiary in Germany.

The expansion into Britain and Ireland coincided with not just an increased retail footprint for the chain, but also the beginnings of a new era of retail that was heavily influenced by the British and its Executives and Managers. Fred Moore Woolworth, F. W. Woolworth’s second cousin, became the MD (Managing Director) in Britain; however, Fred’s health took a turn for the worse in 1922 and he passed away in 1923. That led to the promotion of Bill Stephenson (‘The English Mr. Woolworth’) to lead the growth in Britain; initially, Bill had been the only British recruit to join F. W. Woolworth UK.

While growth in the US continued to accelerate under the leadership of F.W. Woolworth’s brother Charles, the rapid ascent of Woolworth’s UK – under the direction of Mr. Stephenson – led to many retail innovations that would turn Woolworth’s into the iconic brand that many in the post-War generations would come to love.

This even led to problems of copycatting, as a group of iconoclasts snuck under the radar and created their own version of the Woolworth’s brand in Australia, one that was not under the control of F. W. Woolworth and Co.

It wasn’t until the mid-1920’s that the chain began to see some of its first problems, as competitors had adapted to the format. The Board was relatively hesitant to shakeup such a proven formula; however, their German subsidiary was proving successful upon its opening in 1927 due to their experimentation with higher-priced items.

The expanded price range reinflated Woolworth’s fortunes in the latter part of the decade, leading up to its 20th birthday (officially) ahead of the infamous Market Crash of 1929.

Whether it was luck or fortune, one of the founders managed to convert all his stock into gold ahead of the 1929 Stock Market crash, while Mr. Stephenson worked with the Company Treasurer Byron Miller to restructure the shares on the London Stock Exchange (LSE), including the issuance of a special dividend to investors, which helped save many of those who were wiped out in the Crash.

The combined actions buoyed the firm to continuous growth, despite the stock market crash in the United States and increasing tensions in Europe.

Leading up to the Second World War, inflation became a problem in Britain which forced the company to abandon the upper price limits in its somewhat independent Sixpenny stores. When Britain and Canada joined the War against the Germans, the chain tried to hold a ‘neutral position,’ which certainly caused controversy in its home markets!

Once the Americans joined the War in the early ’40s, Woolworth’s became involved in the American wartime efforts, while UK Chairman Mr. Stephenson became a key piece in the British efforts as Ministry of Aircraft Production. It is unclear what exactly happened with the German subsidiary, however, the Woolworth’s Museum lists out extensive damage to its retail and warehousing facilities across the US, UK, and Germany as a result of the War.

As the War ended, the Baby Boom began and with it came a new era of prosperity in the Western World – although some places benefitted more than others. The American and British divisions (somewhat independent) were living in two different economic realities, not to mention that their two cultures differed greatly.

Given that there had been no war fought on Canadian soil either, Canada was another important post-War market for the company, which continued to grow and make profits through the ’50s.

In 1959, the company called a ‘global’ convention, bringing together Store Managers and Executives from across Britain and North America to celebrate the company’s 50th year (since Incorporation). Robert Kirkwood was the company’s CEO. He sought to transform the brand through to adjust to the rapidly-changing market conditions and was described as a ‘visionary’ leader of sorts. His speech at the ’59 convention emphasized the emerging competition and how quickly the market had changed.

The big change was the move to ‘self-service,‘ and the previously pioneering Woolworth’s brand found itself behind the rest of the pack. In Britain, they launched their first self-store in 1955, a first for the Woolworth’s brand.

By the ’60s however, Woolworth’s was falling far behind the competition in the ‘self-serve’ game and the American branch of the company was in search of a new idea to help the chain reinvent itself.

CEO Robert Kirkwood had already begun making moves, but perhaps his signature move – which would ultimately be the downfall of the company – was the launch of the Woolco brand and retail model in 1962.

Woolco was a completely new concept, with the company deploying a team of architects and designers to come up with a retail design that was built for big, out-of-town suburban style shopping that included new fashion, home furnishings, and the creation of an auto and garden sections. Much like the modern-day Canadian Tire, Walmart, etc. The first Woolco stores were launched in Columbus, Ohio and Hamilton, Ontario, Canada in 1962. And the CEO was ready to go big or go home with this concept.

There were more than 100 Woolcos by the end of the 1960s. Woolworth’s would also acquire the shoe giant G.R. Kinney in 1963, and the fashion chain Richman Brothers in 1969. Woolworth’s UK was hesitant to open Woolcos due to the different culture and buying habits of British consumers, but they opened 3 select locations between 1967 and 1969.

Buy the time Woolworth’s reached the ’70s, it was on the decline, mired in debt, declining profits, and a lack of alignment between Executives on the different sides of the pond.

In 1979, the company received its first hostile takeover offer from the small Canadian company called Brascan. Brascan was like the new-kind of LBO (Leveraged Buyout) firm that became popular on Wall Street in the ’80s. Their bid failed, but had they succeeded, they would have taken over an empire of nearly 5,000 retail stores that spanned the world.

The $35 per share bid by Brascan became a true skirmish between Boards, with Woolworth’s Board arguing foul play by Brascan and its bankers; however, despite the fact that the hostile takeover was successfully repelled, the company was facing a cash cliff that would inevitably lead to their downfall a few years later. All because CEO Kirkwood’s decision in the 60’s to finance the Woolco rollout with the company’s existing mortgages.

Instead, the chain would end up being sold off in pieces, starting with the 1982 buyout of the UK firm. The controversial deal for £310M by Pasternoster (of ‘Pasternoster Stores’) had the consent of only one shareholder.

All of the Woolcos were closed in the US in 1983, while they remained open in Canada where the concept had proven successful. The American-controlled company launched a restructuring plan in 1993 that saw the closing ~400 stores in the US, while converting its Canadian stores to ‘The Bargain! Shop’ for closeout purposes.

And so, about 118 years after it was started by F. W. Woolworth as a revolutionary new concept in retail, the Woolworth’s dynasty went down with a whimper. Decisions made in the ’60s and ’70s proved to be crippling for the brand by the ’80s, and amid a new era of competitors that included Walmart, KMart, and others, the company simply couldn’t compete.

Nevertheless, Woolworth’s will always be remembered fondly by many who shopped in the store or worked in the chain during its golden years. They created a family-friendly, sociable environment where one could go for lunch, or to buy toys for the kids, or simply to browse the newest retail goods. Their original five-and-dime concept stores helped revolutionize the supply chain and brought lower-income families an array of high-value goods during hard times, while thousands and thousands of individuals were happily employed and able to provide for their families. Hopefully, we will see another retail chain with a similar spirit and vision emerge as we enter a new era of retail in the decade ahead.