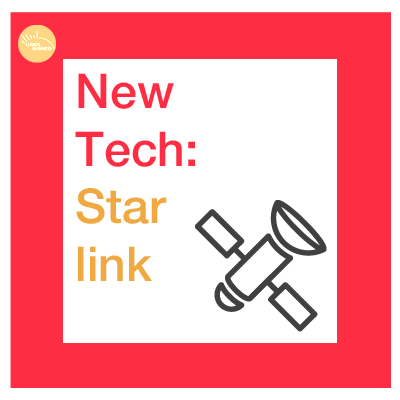 Is the backbone for a New Internet being built?

Derived from research at Elon Musk’s SpaceX rocket company, Starlink is a network of low-orbit satellites that can broadcast an internet signal into any location with a Starlink transceiver installed on the home.

Elon Musk has recently made waves worldwide because of his $44B purchase of Twitter, but we are here to talk New Tech in relation to another Musk innovation – Starlink satellite internet.

Starlink is a low-orbit satellite internet network run by SpaceX, offering internet connectivity to anywhere on the planet, especially rural locations where broadband does not exist or has poor speeds.

In March 2022, SpaceX announced that Starlink has reached 250,000 subscribers. As of April 2022, there are 2,100 small satellites in low Earth orbit (LEO), with 32 countries licensed for global coverage. But that is just the beginning.

In the US, SpaceX has approval from the Federal Communications Commission (FCC) for a Starlink network of 4,408 satellites. But it’s seeking additional FCC approval to expand that network to over 30,000 satellites.

SpaceX was founded by Elon Musk in 2004. In that same time period, the underlying technology for Starlink was being developed by many different companies, including SSTL (Surrey Satellite Technology), a company that SpaceX acquired an stake in before selling it to another company in 2008. Nevertheless, the seeds for a Starlink satellite constellation were planted.

In 2014, Musk and entrepreneur Greg Wyler were in discussions to form WorldVu (which became OneWeb) – a constellation of more than 700 satellites – but those discussions between the two broke down and each ended up pursuing their own satellite networks. Simultaneously, SpaceX filed an application via the Norwegian telecom regulator under the name STEAM, an application that was eventually filed with the FCC in the U.S. in 2016 in what was becoming a very competitive market at that time.

Where SpaceX does have a clear advantage is getting the satellites into space, since that is the company’s primary business.

The goal for SpaceX was always to build an economic, low-orbit satellite network with a dual function: target 50% of the “backhaul” network (core ISP (Internet Service Provider) traffic network) and 10% of the local internet traffic in high-density cities.

By October 2016, the satellite division was focusing on a significant business challenge of achieving a sufficiently low-cost design for the user equipment, aiming for something that ostensibly can be installed easily at end-user premises for approximately $200

Starlink was never lesser than SpaceX in terms of priority, however, according to Elon Musk.

“The satellites constitute as much, or more, of the cost of space-based activity as the rockets do. Very often, actually, the satellites are more expensive than the rocket. So, in order for us to really revolutionize space, we have to address both satellites and rockets,”

While it all sounds very James Bond, Starlink’s competitive advantage was always tightly tied to the fact that it was incubated within SpaceX from a technological, manufacturing, and capital perspective. The first batch of Starlink satellites were launched in May 2019 on the Falcon 9 rocket.

Starlink is, in a sense, a parallel internet to the current one that we know. There are no routers and the packets flow between satellites and their users. The ISPs (Internet Services Providers) – who are the gatekeepers of the current internet structure – have the potential to be disrupted by Starlink.

On the surface, the innovation here is the ability to reach rural communities that would otherwise not have internet (period) or not have reliable enough internet to be productive. This, in and of itself, is a significant innovation, as nearly 40% (2020) of rural homes do not have access to the internet; of those that do have an internet connection, reliability and speed are real problems.

The other factor in the deployment of Starlink is the rise of internet censorship globally. This gives users – even those in urban areas – an incentive to at least consider Starlink as the gatekeeper structure is different than a typical ISP connection. In the future, ‘platform routing’ may be affected by the Starlink service.

Nevertheless, from the perspective of the customer and the “Jobs to Be Done” framework, the Value Proposition is heavily geared towards the rural consumer, especially given the necessary investment into the hardware (transceiver) to get the connection up and running. The discrepancy in hardware cost ($599 USD vs. $2,500 USD) is between Starlink Internet and Starlink Business.

Along with the monthly Starlink internet plan cost, you’ll also have to pay the $599–$2,500 plus shipping for the Starlink Kit upfront. The Starlink kit includes your Starlink (the dish), Wi-Fi router and power supply, cables, and base. Elon Musk has stated that reducing the equipment cost is one of Starlink’s biggest challenges.

As with most new innovations, there is a S-Curve driven by Early Adopters who are willing to take a risk on a product/service, paving the way towards innovations like Starlink becoming mainstream in the future by paying a higher price in the earlier days.

The two main dimensions to the Starlink technology from a hardware perspective are the satellites themselves – which are launched via SpaceX rockets – and the transceivers that are shipped to end users via the Starlink Kit.

There are multiple U.S. patents filed in relation to the transceiver filed by SpaceX. There are also patents for a ‘satellite constellation‘ filed by Google, which to some extent seem to be influential in the SpaceX design since certain key talent shifted from Google to SpaceX in 2017.

Satellite internet can be notoriously laggy. So, to move more data with minimal delays, Starlink satellites occupy much lower orbits than traditional satellites — orbiting only some 340 miles (550 kilometers) above Earth’s surface

Being ‘low orbit’ means that we can actually see the Starlink satellites in the sky around us, they look like stars.

Starlink’s spacecraft are much smaller than conventional satellites — dubbed smallsats — weighing a mere 550 pounds (250 kilograms) each. Some have even referred to them as flying routers.

As it currently stands, the Starlink satellites are connected to internet ‘gateways’ on the ground, which link up with fiber-optic cables. But in the future, SpaceX will use lasers that allow the satellites to talk to one another and bypass the on-the-ground gateways.

Instead of connecting people to a nearby ground station, the lasers would let the satellites talk to each other directly at the speed of light, which is faster in the vacuum of space than in fiber optic cables. In a Reddit AMA (“Ask Me Anything”) session, company engineers said the tech is still too expensive and challenging to manufacture in volume, but they expect it to roll out in future generations of satellites.

While Starlink is becoming increasingly available now in many different countries, it very much remains a futuristic innovation. The cost of the hardware remains high and the satellite network deployment is still in its infancy. But there is no doubt that given its structure and sophisticated satellite technology, it could become the backbone of a New Internet.