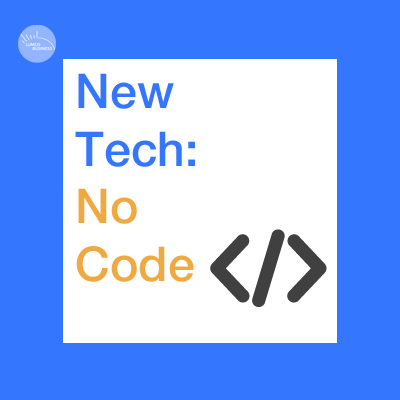 Will the next generation of digital platforms be built using No-Code?

It may sound paradoxical, but we are entering an era where you can code with no code. By ‘you’ that means you, the non-coder. Instead of being cheeky and saying “learn to code” to those non-techies who lose their jobs, we may end up starting to say “learn to no-code” with a degree of sincerity in the future.

The newly-minted No-Code Movement is synonymous with the Maker Movement, which gained prominence in the late 2000s as platforms like Etsy entered the mainstream and the concept of ‘Maker Labs’ started to popup, giving virtually anyone access to a 3D Printer. Both have their roots in the 70s, a time when craftsmanship was limited to physical tools and coding itself was a novel concept.

Now, No-Coders are popping up everywhere, building apps and sparking businesses out of virtually nothing more than a concept. The net effect is to bring the capital cost of building a ‘code business’ down and make digital entrepreneurship more accessible for everyone on the planet.

No Code – The History

“Low-Code” and “No-Code” have roots that go back to the ’70s. The concept of developing application-based programming ‘without code’ comes up in books dating back to the ’80s. Many, however, consider Lotus 1-2-3 and Microsoft Excel to be the original ‘No-Code applications.’

Lotus released Lotus 1-2-3, a spreadsheet program that was the IBM PC’s first “killer app”, in 1983. At the same time, Microsoft was laying the groundwork for what would eventually become the Microsoft Office suite: releasing Word in 1983, Excel in 1985, and PowerPoint in 1987.

Then came the internet in ’90s, and with it coding languages such as HTML and Javascript. To build websites in the ’90s required coders. The original WYSIWYG (What You See Is What You Get) applications were born in the ’80s, but in the ’90s the first HTML WYSIWYG apps were born, creating a basic GUI (Graphical User Interface) to enable non-coders to create websites.

A full year prior to Microsoft’s acquisition of Vermeer, Silicon Graphics, at the time the hottest company in Silicon Valley, launched a product called “WebMagic”. It was the actual first WYSIWYG HTML editor, empowering designers and business people for the first time to create web pages without learning to code HTML. This is the previously untold (and rather improbable) story of how that historic application came to be…

From Wordstar (followed by Microsoft Word) in the 80s, to WebMagic (followed by Frontpage) in the ’90s, came WordPress in the 2000s – a major innovation in non-code-based web applications.

Since that point in time, many other HTML/CSS based GUI editors have come out. The web has exploded in popularity. But these are mostly related to the creation of webpages.

No Code – The Innovation

If non-coders (designers, creatives, entrepreneurs) can use No-Code tools to create the back-end of their digital ideas, then they can compete with VC-funded startups worldwide without themselves needing to raise VC funds. That is a huge innovation in the market.

But the real innovation seems to be the inter-connectivity of multiple No-Code apps coming together to build the plumbing of platforms that can themselves scale.

As we see meta-innovations like AI (Artificial Intelligence), blockchain, and others scale into the market, it is essential that platforms can integrate them without needing to rebuild the technological plumbing itself.

No-Code platforms like have an API Connector, for example. This can be used to connect to 3rd party services, pre-built algorithms, and other advanced technologies.

No Code – The Technology

Airtable, for example, has raised $1.4B to date. Bubble has raised $106M to date. Zapier reached a $5B valuation in Q1 ’21. These are advanced and very valuable technology companies that many people (even inside technology) have never heard of.

If you search Google for patents by these companies, nothing much comes up. So what have they built that is so valuable technologically?

Bubble, for example, is built on the JSON coding language, and uses Javascript, HTML, and CSS modules in their core application. While a user doesn’t need to know these to build on Bubble, they do follow standard web protocols to ensure reliability and scalability.

What makes these apps different is the philosophy behind them, not so much the technology.

It was founded back in 2012 when Joshua Haas (a Harvard graduate in philosophy) saw the potential of solving a well-known challenge: how can we make it easier for a non-technical entrepreneur to create a a tech product? He met his co-founder, the french-born Harvard Business School graduate Emmanuel Straschnov, through a friend and the two talked about his vision. It wouldn’t be another website builder, but a platform flexible enough to create any kind of database-driven application.

The entire premise is to wrap the complexity of the technology at the platform level – both from the front-end and back-end perspective – in the style of drag-and-drop applications that non-coders can learn to use and eventually build entire applications on. Naturally, high-level coders will build in and on-top of these apps as well, just not exclusively.

Overall, it is expected that No-Code applications will drive a lot more digital entrepreneurship and platform creation in the years ahead among non-coders. How these platforms compete against well-funded Dev teams in main markets is to-be-determined, but from an innovation perspective, the No-Code trend is positive.