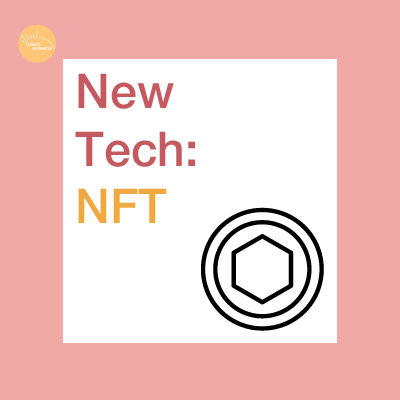 NFTs are a scam! They’re the future! Meet in the middle?

Let’s dig into the technology that underpins NFTs and try to determine some future paths for the industries being built on top of the pseudo-blockchain tech.

“Non-Fungible Tokens” is not exactly the most classy sounding term, so they have conveniently been dubbed NFTs since hitting mainstream lexicon over the past couple years. The word ‘fungible’ has a very important meaning relative to digital tokens, however:

The backdrop for this edition of New Tech on NFTs is thus a mix between high-tech blockchain technology and the principle of rarity, an attribute of Digital Art to which the whole concept has become directly linked to. Despite all the various opinions on NFTs, it is a market with an expected value of nearly $150B by 2026.

What Is a NFT?

NFTs are yet another innovation layer built on top of the blockchain.

A non-fungible token (NFT) is a unique digital identifier that cannot be copied, substituted, or subdivided, that is recorded in a blockchain, and that is used to certify authenticity and ownership

A smart contract is a self-executing contract with the terms of the agreement between buyer and seller being directly written into lines of code. The code controls the execution, and transactions are trackable and irreversible.

In a sense, this means that a NFT is a rare digital asset – such as pixelated art or a valuable photograph – that is linked to a self-executing contract on the blockchain. In other words, a piece of art is “minted” on the blockchain and then sold on the open market for a certain price. Once that price (‘floor price’) is met or exceeded by buyers, the digital asset’s ownership rights are automatically transferred to the buyer.

Minting an NFT, or non-fungible token, is publishing a unique digital asset on a blockchain so that it can be bought, sold, and traded.

5 Steps to Explain How a NFT Transaction Happens

We are seeing Digital Art, media such as Music, rare Collectibles such as sports cards, and even Property deeds are being NFT’d in the current marketplace.

The first example of NFTs in the wild came from the Bitcoin blockchain in the form of Colored Coins. The timeline below gives a more detailed synopsis of the history along the way to the ‘modern NFT’ industry, but we will look at some of the highlights below.

People used Colored Coins to buy a range of assets – including government bonds and precious metals – along with some types of goods that are now more commonly associated with NFTs. Their were some flaws with Colored Coins – mainly linked to their complexity – and that is in part what gave form to NFTs as we know them today.

In the mid 2010s – when Bitcoin was by far the dominant chain and the principal idea behind blockchain was still linked to payments – there were multiple chains experimenting with their own version of NFTs around smart contracts.

Ethereum burst on the scene in 2014 with their Crowdsale (ie. Initial Coin Offering or ICO) that helped them raise over $30M. At this time, smart contracts and the idea of ‘apps on the blockchain’ (ie. DApps – decentralized apps) was a pipe dream, and to a certain extent still is today relative to the original vision.

But as soon as ‘smart contracts’ entered the lexicon, rapid experimentation began to create every type of conceivable blockchain-based application, including what we now know today as NFTs.

The first recognized NFT to be published was called ‘Quantum’ on the NameCoin blockchain in 2014 by artist Kevin McCoy. If you haven’t heard of NameCoin, you are definitely not alone, as it only exists now as a small community. But in the early days of “crypto,” it was infamous for being the first fork of Bitcoin or altcoin (Ticker: NMC).

Quantum is so famous that its rights were sold in the “Digitally Native” Sotheby’s auction in 2021 for $1.47 Million USD. Yet, as a result of the ‘fine print’ stemming from minting on the NameCoin blockchain, there is some controversy now about the ownership rights in a current lawsuit. At issue, was the fact that ownership rights on NameCoin needed to be renewed after 250 days, similar to a domain name expiring.

Details of the suit aside, it shows how when new innovations or markets are being pioneered, there are always hurdles, challenges, and legal issues that need to be overcome before it becomes anything near mainstream.

The Cryptopunks are one of the earliest examples of a “Non-Fungible Token” on Ethereum, and were inspiration for the ERC-721 standard that powers most digital art and collectibles.

10,000 Cryptopunks – launched on the Ethereum – were given away for free in 2017 and eventually become a collectors item worth big money. Similar to Quantum, some were sold on Sotheby’s for millions. The Cryptopunks helped ignite the craze, giving way to CryptoKitties and many other popular NFT Collections post 2017.

Standards developed on Ethereum helped the market reach a bigger audience, and in 2021 – dubbed the “Year of the NFT” – major auction houses started selling them, as we have seen above with Quantum and Cryptopunks.

The NFT markets have crashed back down to earth in 2022 after the major speculative boom in 2021, one that affected basically all tech-centric markets; nevertheless, the innovation persists.

The innovation behind NFTs is in protecting the creators and their creativity – preserving the authenticity that is crucial to the creative process for any artist or creator.

Human creativity is idiosyncratic – meaning that original creative content is never equivalent to a replica, no matter how good it is. Original artwork or any other creative product has its own unique journey. These values are never found in plagiarized art.

The unique digital identifier behind every NFT transaction ensures that the original piece is both known and verifiable to anyone, anywhere.

Many wonder, “Can’t I screenshot the NFT without purchasing?” This is true, but you would not be able to sell it at the value of the original. Similarly, if you took a photo of the Mona Lisa it would be challenging to find a collector.

As we have seen above, there is the primary market where a piece of digital art or collectible is minted and sold to a would-be buyer on one any numerous possible NFT Marketplaces, which include but are not limited to:

But there are also secondary markets where a ‘rare’ or ‘valuable’ NFT can be resold for anywhere from a few dollars to millions. The introduction of secondary markets fuels the primary markets in many ways, as NFT Collectors hunt for unique or potentially undervalued pieces knowing they can resell them on secondary markets for massive multiples to what they paid.

Secondary markets can’t function efficiently unless authenticity can be both proven and validated. By preserving authenticity, the value chain can operate smoothly and create markets for various types of digital art, music, collectibles, and other NFT-based goods.

The underlying technology behind NFTs is blockchain technology, which was dissected in another New Tech post.

The major difference between a digital currency transaction and a NFT creation is the minting process.

NB- this is a general explanation of the process, the steps are not ordered relative to one specific marketplace or another

Minting a NFT is comparable to publishing your own token on the blockchain:

NFTs on the Blockchain

Like Digital Currencies, there are trackable and traceable characteristics to a given NFT that make it ‘immutable‘ or permanent as long as the underlying blockchain itself is not taken down (ie. by a 51% attack). This is why most popular NFTs are published on the ‘top blockchain’ which is Ethereum at this moment in history.

Recent data shows that Ethereum is by far the dominant NFT Chain, with Solana in a distant second and a new chain called Stacks – designed for Bitcoin NFTs – having only a miniscule volume locked in.

Once a NFT is on the blockchain, you can’t unpublish it. Similar to digital currency transactions, once they are published to the blockchain, there is a permanent record of them. This is a feature of blockchain technology that has helped create more transparency and trust in the broad market. In other words, if someone creates or publishes a certain type of culturally or politically-inflammable piece of digital art, music, etc., no central party can take it down.

For this reason, NFTs for a core part of the DeFi (decentralized finance) movement. There is really no difference between core blockchain technology and NFT technology, save for details related to minting and metadata.

Going into the future, the stories surrounding blockchain technology vs. NFT technology may somewhat diverge given future risks associated with certain public blockchains. For example, if certain security flaws in any major public blockchain emerge, then the NFTs stored on that blockchain would have to mint on another blockchain or risk being wiped out. Certain protocols may therefore emerge to protect NFTs, ones which would not be needed for digital currencies since they are essentially part of the blockchain protocol itself.