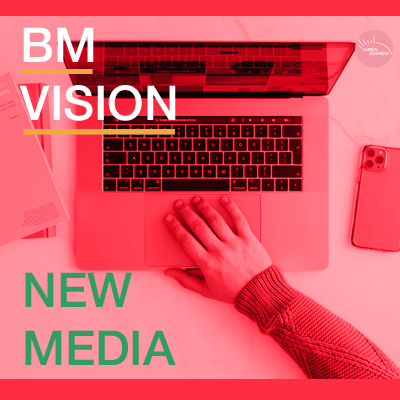 The early Twitter business model shift has sparked the conversation of who owns what on social. In the old (free) model, you are the product because advertisers make the rules.

In the new (subscription) model, you can become a creator and monetize your content. The inception of a New Media depends on the evolution of this new model, so let’s explore the Business Model Vision behind that.

The Vision for a New Media landscape is taking shape now in front of our eyes. On one hand, we are seeing the death of old models and legacy networks. The Advertising model of social networks is under threat and the most talented members of the New Media landscape are experimenting with new ways to monetize their efforts across an array of community networks.

But the ‘New Media model‘ is not solidified, and its development is only in its infancy. The next wave revolves around a combination of new community networks and better incentive structures, which is linked to payment’s innovation and blockchain-based solutions.

Future models with Decentralized IDs will further shift the innovation curve towards creators, to the point where in the future you have to wonder how we will consume news/media?

Many niche communities have formed in recent years on a slew of Community Networks. These can include, but are not limited to: Slack, Facebook Groups, Telegram, Discord, and others. Here the goal is to create like-minded, interest-based groups that can interact with one another and share ideas, knowledge, skills, etc.

The development of these communities can take more advanced, membership based community networks like Mighty, Tribe, and others. Here, the goal is to build a loyal membership based on a subject and introduce more expertise and/or structure into the community in order to monetize it.

From a ‘New Media‘ standpoint, there are so many different types of media and models being experimented with, many of which rely on some form of Community Network for both engagement and monetization.

One of the more common routes for New Media members who compete against political news networks (ie. citizen journalists) is to build multiple channels on multiple networks and attempt to solicit donations.

For New Media members who compete more against niche content networks in relation to less polarizing content such as food, fashion, or fitness, it is more common to see a membership base built on a membership-based Community Network listed above.

A slew of Social Apps are emerging that pledge themselves towards a ‘creator model’ with Twitter itself potentially entering into that conversation with the initiation of the Twitter Blue Subscription strategy. There is also BeReal that is pledging to introduce payment options to the network before any Ads in a move to incentivize and grow its creator network. Even Substack has the makings of a pseudo social network with the way they use their network graph to suggest “Recommendations” for readers in order to help their members acquire customers.

This whole array listed above is leading the transition from the Web 2.0 to the Web 3.0 or Web3. But calling these types of sites ‘Web3’ conjures up visions of cryptocurrency platforms who are building tokenized versions of social networks. The vast majority of these types of platforms have put large R&D budgets into developing ‘economic incentive models’ for creators in communities on the blockchain. And yet few – if any – have developed real clout or traction in the market.

Which leads us to the inevitable future collision between the Twitters, BeReals, and Substacks and certain Web3 platforms. Where this happens and how it happens – given the touchy subject of tokens and cryptocurrency – is open to debate.

Yet for New Media to thrive going forward they need direct incentive models that inevitably involve some form of payment, or more likely micropayment. This future model would sit between what we currently in Ads and what we see in Subscriptions, as consumers don’t want one or the other for eternity, they want to play in the middle ground. This requires some form of Payments innovation as shown below.

Whether a future of ‘micropayments‘ comes through innovations on the traditional Payments stack like the schema shown above from a WeFunder (equity crowdfunding) campaign or through blockchain-based innovations is TBD.

But if instead of Likes, Follows, ReTweets, and Views came Revenue, then members of the New Media would be able to radically shift their business models going forward. The shift in the value capture equation would mark one of the largest changes in the media landscape in modern history.

Under the Bluesky (Social Internet) Vision, we see the concept emerge of the Decentralized ID, which would allow users in one social network to “port” their data over to another and vice-versa. This would have the effect of enabling new models of the “news” and vastly reducing the probability of censorship.

Specifically as it relates to New Media, the Decentralized IDs would create a few immediate benefits:

In such a partisan, viral-clip type of environment in and around Media, even certain niche, non-contentious members of the New Media class can sometimes find themselves in heated debates that are somewhat tangential to the core focus of what they are reporting on.

Hypothetically, imagine someone builds a loyal membership base in something related to food, and gets caught-up in some hot-button issue related to the “politics of food” at any given moment. In that moment, ‘being honest’ could result in their entire revenue stream(s) being threatened in the current Media model. Maybe they built a huge Subscriber base on YouTube, for example, and if removed they would lose a massive income stream.

The Decentralized ID model would – in theory – protect against these types of outcomes. There will still be a massive need for curation and moderation of all types of content; yet, the persistent fear of being cancelled and removed from a sustainable income stream is what needs to change in the New Media model.

A Vision Beyond The Digital Platforms

Media is sometimes called the “fourth pillar” of a democracy. Its value goes beyond the dollars and cents calculations relative to value generated. It seeds the conversations that shape society, captures the soundbites in the halls of power, and shows viewers with video what is happening in one part of the world to the next. So much of the recent media model has been digitized, yet the impact is most felt in the physical world.

Even today on mainstream media news channels, we more often than not see reference to a Tweet or YouTube clip. The social networks progressively drive the news cycle. This, naturally, has good and bad repercussions.

The Vision beyond Digital Platforms is to give the creative and tenacious journalists – in any field – the ability to monetize their work. It isn’t about shaping narratives from the business model perspective, but about shaping opportunities for future income streams. If the creativity embedded in media is stifled, then we would never see the constant need for innovation in the platforms mentioned above. But we do. If anything, the New Media model is creating a massive innovation cycle across media, social networks, and payments all at once. This should continue!

Overall, the vision around what ‘New Media’ is becomes more clear as dimensions of creator platforms and the social web 3.0 start to become more apparent. It is an über-competitive, highly-fragmented space that is changing in real-time. With many new innovations – such as micropayments – still in the pipeline, we remain in a transition phase. But in the years ahead, the vision will become more concrete and (hopefully) tangible to the new media creators.