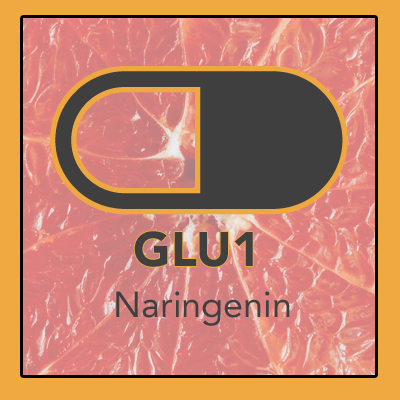 Naringenin is flavonone (ie. type of flavonoid) found in the peels of citrus fruits such as grapefruit, oranges, bergamot, etc. Research into this molecule has found anti-cancer, hepato-protective, anti-inflammatory and immunomodulatory properties to name a few. Recent research has pointed towards its relevance in digestive/metabolic disorders, which is why I look into in relation to GLU1.

Part 3 – GLU1: Pterostilbene and the Liver

The problem with Celiac (and related digestive/metabolic disorders) is that there are no “cures” and the disease itself is poorly understood by Western Medicine.

A gluten-free diet is necessary, but in no way does it guarantee any sort of healing/recovery for a large % of patients, by some estimates between 30 – 50%. This paradox means that in all likelihood – despite decades of research – the disease is not understood by the mainstream medical community well enough to find solutions.

On top of that, the disease carries with it a much higher probability of developing Type 1 diabetes (10- 20X higher than the average population) and a variety of other potential complications from dealing with auto-immunity.

The effects on the small intestine are well documented, but the causative dimension is still “unknown” leading to many referring to it as a de-facto “genetic disease.” Estimates are wide ranging, but on average it is presumed to be prevalent in approximately 1% of the population. Nevertheless, in some parts of the world it is essentially non-existent in the population, whereas in other parts such as Northern Europe, the prevalence goes above 2% of the population. Such wide-ranging variance is much more indicative of a disease dictated by epigenetics and the likely activation by an array of potential environmental toxins.

Many of the leading therapeutic discoveries over history originate in plants and the natural habitation. Acetylsalicylic acid (aspirin) originated in the bark of the weeping willow.

Search for ‘Naringenin’ and you will see its potential application being explored in relation to cancer, liver fibrosis, Parkinsons, and a host of other debilitating conditions. Should Celiac be added to the list?

When a person chews on a grapefruit peel, for example, the bitter taste is produced by naringin. Upon entering the body, the liver produces the enzyme called naringinase, which metabolizes naringin into the bioactive compound naringenin.

There have been hundreds of studies in one form or another on Naringenin to study its potential application as a novel therapeutic in everything from cancer to chlamydia.

Specifically related to digestive disorders, there are two relevant dimensions:

Both these areas are significantly disrupted by Celiac.

Way back in the early 2010s, studies showed Naringenin’s ability to enhance the integrity of the TJ’s in Caco-2 cells in the small intestine. The more recent study above (2020) shows that the likely therapeutic effects in the small intestine go beyond that. The importance of this in relation to a disease like Celiac and.or NCGS (non-celiac gluten sensitivity) cannot be understated. Keeping in mind these are animal – not human – studies, it doesn’t show anything definitive. But it certainly points to a potential mechanism that merits further investigation.

In relation to the second point on the gallbladder/pancreas:

Naringenin has already gained a lot of interest as a potential weight loss drug because it is able to affect the hormone CCK (cholecystokinin) that, as shown above, controls the digestive system. Part of the digestive cycle includes the gallbladder and pancreas, but also the small intestine. The loop is connected.

The dual mechanism of working at the level of the Tight Junctions (TJ) in the small intestine and the affecting the levers of the digestive system organically is precisely why Naringenin is relevant to Celiac and other related metabolic/digestive disorders.

Gluten and The Small Intestine

Unlike Non-Celiac Gluten Sensitivity (NCGS) or other related conditions that confer a sensitivity or feeling of bloating/pain when eating gluten, Celiac damages the villi on the wall of the small intestine and causes issues with intestinal permeability, which typically leads to issues with malabsorption of nutrients from food (among other problems).

Using the below example from a medical study of a Celiac patient’s key levels, we can see that some metabolic markers are completely off the charts.

Sufficient to say that issues in the small intestine are not limited to digestive issues, which is why I would classify Celiac as a metabolic disease. And if gluten itself were the cause of such an autoimmune disease then removing it would resolve the disease. As bad as it is to not be able to eat gluten, it would be a small tradeoff in order to beat a debilitating disease.

The main question is, what causes the small intestine to start reacting to gluten in this way?

To say that it is simply a “genetic disorder” is probably a half truth. If medicine were as simple as saying everything we don’t understand is related to a set of unknown genes then we would be a lot further behind than we are today.

What we can say – definitively – is that regulation of the TJs is arguably the most important factor in the mechanics of the disease.

Furthermore, addressing the permeability and regulation of something as complex as the TJs in the small intestine is something that seems far off into the future from a traditional therapeutic perspective.

Naringenin’s core mechanism(s) – while not completely understood – affects cytokines and the inflammatory response in the body, in addition to working at a more cellular level.

Overall, Naringenin ticks some boxes as a potential ‘therapeutic of interest’ in relation to celiac and other digestive/metabolic disorders that affect the small intestine and surrounding hormones. It is not (on the balance) commercially available as a supplement, etc. but it is being studied around the world, most notably in relation to cancer. Given some of the data outlined in this and the previous 3 posts, it probably merits some more attention into the future.

Part 3 – GLU1: Pterostilbene and the Liver