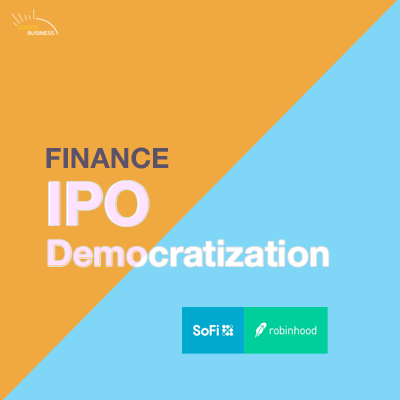 In the complex world of investing, there are always fly-by-night trends trying to masquerade as movements to rope in retail investors.

Mean reversion always separates the wheat from the chaff in the end, which is why we look at ‘IPO democratization’ and how this might be one of the few ‘access’ opportunities in recent memory with real potential for retail.

A recent article in the Wall Street Journal encapsulated the sentiment of how many on the outside feel – “The IPO Club Might Finally Have You as a Member. Still Want In?”

The question is, now that IPOs are being ‘democratized’ by the likes of SoFi and Robinhood, are retail investors going to be part of a trend or a real (r)evolution in retail investing?

Upstart brokerages Robinhood Markets and SoFi Technologies recently said they would give their customers access to IPOs. They are among the latest firms to try to crack open one of Wall Street’s oldest clubs: those getting distribution of IPOs at the offering price, before shares begin trading.

Robinhood recently launched the IPO Access feature, enabling its some 15 Million+ users in the U.S. to buy shares in IPOs before they become publicly traded, an option typically only available to high-level investors through their contacts with the underwriters at the world’s biggest investment banks.

The first IPO to launch via IPO Access was for the D2C healthcare-ware company FIGS in late May.

And for the first time, retail investors (industry parlance for nonprofessional buyers and sellers) are going to be allowed to try to get in on the ground floor by asking to purchase stock through Robinhood before the debut.

Around 1% of the available IPO shares were allocated for Robinhood’s retail investors irrespective of their account size, with Robinhood itself making a fee from the underwriters. The FIGS IPO went very well, with the price jumping 36% on the first day, meaning that any Robinhood investor who subscribed via IPO Access and held would have accrued a 36% gain at the end of the first day of trading.

University of Florida professor Jay Ritter has become the expert on IPO pricing. In some ways the IPO-related data is a clear signal that IPO Democratization is a good thing for retail investors. It is also fuelling the controversy that has led to many of the hottest companies to opt for a Direct Listing – as opposed to an IPO – in order for the founders, early-stage employees and investors to pocket more of the proceeds.

From whatever lens you look at the data, it shows that there is a clear advantage to being in the average stock on the first day of trading.

That early access gives investors a shot at the vaunted IPO “pop.” Since 1980, standard U.S. exchange-listed IPOs have on average risen about 18% from their pre-trading offering price to the close of first-day trading

Tech IPOs have fared even better in that time period, with the average ‘Equally-Weighted 1st Day Return’ over the last 30 years equal to 31.2%.

The core debate around Direct Listings vs. IPOs centers around the incentives investment banks have in an IPO as lead underwriters. They want to maximize the return for their investors, who are typically large funds and private equity firms. They generate fees by being the best of the best, which is typically measured by the performance of any respective underwriters’ % gains over time. The better they perform, the more likely they are to get the top companies with the highest valuations, and thus they can generate the highest fees in the market.

Which Investment Bank Underprices Their IPO Most?

In the case of retail investors investing in IPOs via applications like Robinhood’s IPO Access, their incentives are aligned with the underwriters. They invest in the same Share Class, and at the same price as the other investors. Everything depends on which stock, in what sector, at what file price, and at what phase of the business/economic cycle. But in the long run, the data certainly backs up that these types of ‘access’ initiatives are a net positive for retail investors.

In the case of Robinhood, they partner with underwriters of IPOs as described above. In the case of SoFi, who is equally keen to be part of the ‘IPO democratization’ movement, they are actually themselves the underwriter and give their members access to IPOs via SoFi Invest as long as they have at least $3,000 in their account.

As a way to differentiate themselves from others in the market and make themselves appealing as underwriters/syndicates, they dis-incentivize ‘flipping’ of the shares.

SoFi and Robinhood aim to discourage IPO buyers from flipping their newly acquired shares by restricting those who sell within 30 days from participating in any more IPOs for two months or longer. This could boost the appeal of their clients to companies or underwriters.

This furthers the logic that these types of IPOs still need to be treated by retail investors as investments, requiring the typical due diligence and analysis of risk-reward.

However, part of the reason that ‘IPO Democratization’ is itself a theme in 2021 is because of the growing influence of retail investors, as we have seen in the case of meme stocks on boards such as Wall Street Bets (WSB) and other similar forums. If a person follows these boards and the corresponding stocks that get hot (Gamestop (Ticker: GME), AMC (Ticker: AMC), Blackberry (Ticker: BB), and others), it is not always based on raw, fundamental analysis, but rather emotion and momentum.

This idea of levelling the playing between retail and institutional investors is a persistent thread in the whole Wall Street vs. Main Street battle that has emerged since 2008 during the Global Financial Crisis (GFC). The GFC exposed the dirty tricks played by big banks and the extent that special interest groups in elite financial circles were able to influence laws and settlements in the fallout from the housing market collapse in the U.S.

Reading through the boards on WSB and other similar forums, it becomes apparent that many and young and up-and-coming traders are the sons and daughters of those who were greatly affected by the GFC, as that these types of gains they make offer an opportunity at revenge for the losses their parents or colleagues absorbed.

While these younger retail investors on Robinhood, SoFi, and other similar platforms may feel that these types of initiatives help to even out the game, many of those in the world’s hottest companies don’t. For them, they still lose in a sense.

It is possible that more companies, seeing how much of a force online small-investor communities have become, will aim to make them a bigger part of their IPOs. But others might see reason to sidestep the whole complex process, believing an IPO pop represents “money left on the table,” or cash they could have gotten if they’d sold their stock at a higher price to a wider audience.

Thus, while Robinhood’s IPO Access and SoFi Invest’s IPO underwriting are intriguing initiatives for the market as a whole, they may not move the needle on the democratization of investing as much as other future initiatives that are more centered on price discovery and all the corresponding data analysis related to that process.

The world’s hottest companies will likely dictate a lot of this process, as more than anything individuals and investment entities alike want to be invested in the world’s top companies on a long-term basis. With multiple ‘hot IPOs’ (or Direct Listings) expected in the next 12 months, this will be one exciting space to watch evolve.

Overall, IPO Democratization is not another trend, it is a new channel for retail investors to invest alongside institutional investors on promising IPOs. The market, however, is more likely to evolve around the listing companies going forward, rather than the investor groups, and this is what will likely define the evolution of the new market structure in the mid-term.