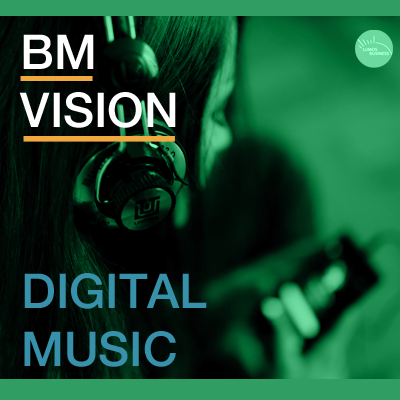 Did digital kill the audio star? Maybe. Could micropayments help musicians find more viable revenue streams in the future? Definitely. But we will need some Vision in relation to the Business Model in order to find out how.

The music market has been growing back a lot of its lost revenues since the ’99 peak. Revenues for the U.S. music industry as a whole have bounced back in recent years from mid-decade lows, an illustration of the trend in the market. Some of of the losses can be attributed to piracy on P2P platforms, while some of bounce back gains can be attributed to the streaming model.

Globally, streaming revenues will tap in around $14.5B in 2022 and are projected to grow towards $20B by 2027, showing healthy growth in the market despite all the competition. Within that ‘Streaming’ competitive landscape, Spotify is the dominant player. As of Q2, 2021, the top 5 in the market were:

While the market remains heavily fragmented, Spotify is still considered “the king of streaming” and is the lightning rod for most critiques against the streaming industry. Any artist who lists on any of the above streaming services is (more or less) subject to the same economics of streaming; although, per stream rates (2020 data) can fluctuate:

Bandcamp is considered the ‘anti-Spotify’ and allows artists to sell their wares (digital downloads, vinyl, merch, etc.) for between 10% (physical) and 15% (digital) net of payment processing fees (4-6% !!!). Despite streaming platforms having hundreds of millions of users, it is very common for the average artist to make more on Bandcamp than they do on Spotify or similar streaming platforms.

This creates quite a quandary. Streaming is absolutely the medium where all the ‘eyeballs’ (or earlobes) are, but for mid-sized labels the average stream payout is $0.00384 – fractions of a penny, and that doesn’t all net back to the artist. Something like radio would typically be more lucrative, but radio isn’t the medium it once was. Podcasts are the next big audio wave, but Spotify is leading the way in that market as well with their push into Audio Ads.

So what’s a starving artist to do?

Even with all their hundreds of millions of users and a business model where artists net back next to nothing, Spotify is either barely profitable or unprofitable depending on the quarter. In their most recent quarterly report (Q3 ’22), they lost about €228M on roughly €3B in revenue.

It is likely that this type of model we are exploring comes in as Business Model Innovation (BMi) and happens away from the market leaders like Spotify, who are still fine-tuning a business model that has been a decade in the making (plus Audio Ads + Podcasts is a new vertical built on top of streaming).

We are looking at the Business Model Vision between Digital Music + Micropayments. The major *asterisk when doing this type of vision work around any business model to do with music is the split between record labels and artists, a perpetual unknown with huge variance. Yet, as we can see from the fairly rudimentary analysis above, a move up from $0.0384 per stream to say $0.10 per stream would be astronomical for emerging artists.

The challenge that we immediately see with this is the problem addressed in the Micropayments post. Credit card payment processing fees make the above unworkable.

The first building block is thus a micropayments solution where the fees are somewhere between $0.01 and $0.05 on credit card transactions (the way the majority of consumers will pay). There is already significant innovation in this arena and that level of innovation will accelerate rapidly over the next 12-18 months as the window opens up between social media and music platforms to compete for creators who want to monetize their content efficiently.

There is also a model where a platform loads payments onto some type of payment mechanism in the form of a Subscription (ie. $5 per month) and enables micropayments to the artists. This would be more of a revenue share type of agreement, and while somewhat inefficient relative to the P2P direct payments model, may be a middle ground for Digital Music + Micropayments.

Below is an example of a snapshot taken from Bandcamp, who have a 4-6% payment processing fee + commission of 10-15%. Normally, we see payment processors have a $0.30 minimum, so 4-6% would likely not apply to purchases below $5.00 on average. The general vibe below feels quite natural, where some songs sell for $1 and some albums for ~€12. This is kind of how we would expect the market to operate.

Yet that margin loss of 15% (Bandcamp fee on digital downloads) + 5% (payment processing fee with $0.30 minimum) turns that $1 in revenue into $0.50 net revenue for the artist (given the stated assumptions). The €12 sale nets out to about €10 for the artist post fees. And this is no criticism of the Bandcamp model, it simply illustrates how a per song download model is unsustainable without micropayments.

It’s safe to say that the average musician/artist isn’t too invested into technology until the point where it makes or breaks their ability to do what they love and play music. On one hand, streaming may suck for some artists revenue-wise, but it gives them exposure they can monetize in other ways:

The business model of the individual artist or band can therefore be broken down into three major buckets:

Most well-known artists and bands are signed to a label and therefore paid a sum of money upfront, to which the label then earns a % off of everything sold into the future (royalty). More independent artists will earn 100% of their revenues but have no label to promote them, etc. Marketing an artist or band can be done on social media, but naturally certain labels can bring a lot of clout to a new artist, which makes it much easier to mass market their music and drive up revenues.

The entire streaming industry was born out of the need for a model to eliminate a lot of the seepage that occurred from an era when Napster, Kazaa, and others caused record labels to lose billions on pirating. That was an inflection point. Now we are at another inflection point where pirating is down, and starving artists are up. The streaming business model is a solution to one and not the other.

If we imagine an emerging artist who was able to do the following:

Keep in mind that the above is only illustrative and not meant to suggest that these prices would reflect what a high-quality artist would sell their music for. But in the above example, if we compare the ‘Net Revenue’ earned from the Micropayments model vs. what they would earn from Streaming:

The nominal monthly difference of let’s say $250 (for round numbers sake) per month for an artist is massive! Because they can reinvest that money into a number of other areas that become more profitable while they grow their fanbase.

To platformize this type of model and give it scale is what will be tricky. If we used the 10% benchmark of the above as a rough estimate of the revenue model, that would need to be split between the back-end payment processor and the front-end platform, like a Spotify or whoever.

This is why most current mainstream streaming platforms are NOT good candidates for this type of model. Their Unit Economics – which make or break their business case to investors – would be shot out the window. But to the streaming players who occupy the bottom tier of the market and need to go all-in on something innovative, there may be a potential model there in the future.

As an addendum, ‘blockchain‘ does not necessarily help this model at the core because blockchain payments also have a transaction fee that make most micropayment models unfeasible.

What it probably takes to make this model work at scale is to assume that the Music Micropayments revenue stream may initially be a ‘loss leader’ but will bring in tonnes of emerging talent because of the Unit Economics for the artist shown above. By either bundling or partnering with channels to more lucrative, high-margin revenue streams related to merchandise, vinyl, or ticket sales could then make the model profitable over time.

The whole post and Canvas is an exercise in Business Model Vision because of the unknowns and risks associated with tweaking the model in favor of artists at scale. The emphasis on Partnerships seems to be the key at this point, which is why it will probably take some time to see this model emerge – aligning incentives across different partners takes time.

Overall, artists/musicians are among the ‘creator’ class who need new incentive structures to help them not only survive, but thrive in the long-term. Current streaming models leave much to be desired, yet new alternative models have yet to emerge at scale. Micropayments may be one type of meta-innovation that helps change this market for the better!