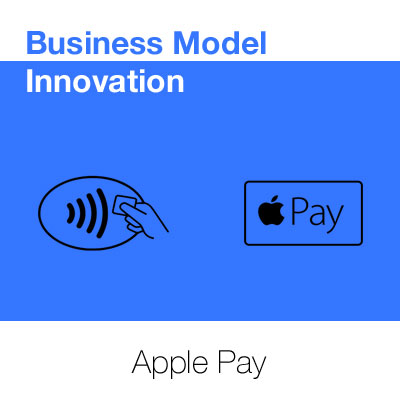 While many other Big Tech firms are eyeing ways to leverage their platforms to enter the banking fray, Apple has taken a different approach – partnering with the banks and card networks – and created a new revenue stream for the company. That’s why we are going to dive deeper into the mechanics of the Business Model Innovation (BMi) behind Apple Pay.

What is Apple Pay?

Apple Pay is Apple’s version of the digital wallet, enabling consumers to connect virtually any credit or debit card to their iPhone and make contactless payments, globally. They do not compete with the banks or major credit card companies but instead offer an additional payment channel for consumers, and Apple earns 0.15% in transaction revenue.

Google, by comparison, makes no money from its Google Pay (GPay) product, as they are focusing on adoption and plan to monetize in the future. That’s why this is an example of Business Model Innovation (BMi), where Apple has created a new revenue stream via partnerships (with banks, card networks, and merchants) for Apple Pay.

With $Trillions of dollars already being transacted in the card payments space in the US alone, this is a new and fast-growing market for Apple to be invested into with its digital-wallet suite of products.

Apple Pay – How Does It Work?

Apple has effectively unified the banks, card networks, and merchants around this product, and as a result the product should be relatively simple to use.

iPhone users will add their card (debit or credit) to the Apple Pay app, and then will be able to use it with any merchant that accepts it using a tap and authenticate procedure with the iPhone (contactless).

Apple had an installed user base of more than 900 Million users in late 2019, and almost half of them were Apple Pay users.

As a result, there is a growing incentive for merchant adoption; however, the question remains as to whether that will translate into actual adoption, as in certain markets (like the US), contactless payments and mobile wallets have seen tepid growth.

COVID19 has been a catalyst for more contactless payments, but that has still not been enough to sway consumers en masse towards digital wallets.

In addition to Apple Pay, Apple Card is in the process of being launched (globally) in partnership with Goldman and Mastercard. This type of bundled product is how they plan to drive customer acquisition and rapid adoption. Apple Card is both a digital and a physical credit card, giving them a banking product that helps entice more of their existing customer base to use Apple Pay and use it as often as possible.

Apple has ~100 Million customers in the US and approximately 30% of those US users are actually using Apple Pay. They don’t need to acquire customers, they simply need to have a progressively larger percentage of its current customer base spending money using Apple Pay; once they have them spending, they want them to use the card a larger percentage of the time (compared to their other credit and debit cards). That’s why products like Apple Card and Apple Cash (P2P payments) are designed to increase adoption and transaction volume, helping Apple Pay become the dominant mobile wallet.

It is unlikely that these products will help pull in customers from other platforms (ie. a user switching from Android to Apple just for Apple Pay); therefore, the strategy is likely to focus on getting a progressively larger % of their US user base (and eventually global) to use Apple Pay on their iPhones.

The card was launched in the US in Q3 2019, and now they are beginning to roll it out globally.

With card payments reaching more than $7 Trillion in the US alone in 2018, it is clear that competition in the payments space will be fierce for years to come. But if Apple Pay is partnering with the banks (including the Challenger Banks) and the major credit card companies, who are they competing with?

Google Pay (GPay) is the first obvious competitor. Samsung Pay is also available on the Android platform for Samsung phones.

Apple Pay is the market leader, overall, while Samsung Pay and Google Pay split the customer base on the Android OS, something that could have implications in the future.

Starbucks has its own mobile app, so does Walmart (Walmart Pay), and both have seen significant adoption but are limited to their respective ecosystems and would not be seen as competitors per se.

There are a plethora of payments competitors in the payments space is the US alone, let alone the global market with major players emerging in Asia, the EU, and Latin America. Many smartphone users will use more than one payments app, and that could have implications on the digital-wallet space if certain platforms offer incentives to lure users from one network into transacting on their platform.

The digital wallet space is new and nascent. Right now Big Tech companies like Apple lead the charge, while Big Banks (like Goldman) partner with them in the hopes of reaching more customers and seeing higher interchange fees. This will likely change in the future, and we have yet to see how regulations play a factor in this market amid a volatile macro environment between geopolitical and currency swings.

It also remains to be seen whether or not the global rollout of Apple Card changes the game for Apple Pay, and plants the seeds for the ‘Bank of Apple,’ which would lead to a dramatic reshuffling of the competitive landscape in banking. Time will tell.

Overall, Apple Pay is a good example of Business Model Innovation (BMi). The company has created a strong business model (0.15% on all transaction volume) through its partner network, and despite somewhat tepid adoption of the Pay product, they are now adding Apple Card and other products to increase adoption across its installed user base.