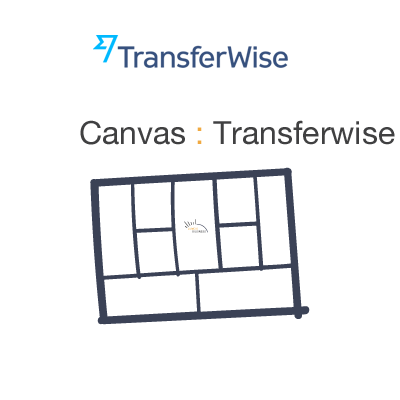 Founded in 2010, the company has pioneered the low-fee model, helping customers save ~90% on forex and remittance services compared to banks. Recently, they have announced a Borderless banking service, placing them closer to the ‘Challenger Bank’ category.

How does Wise (Transferwise) make money?

Transferwise charges a commission whenever money is transferred through their platform, somewhere between 0.6-0.7% on average.

You can compare fees in your own jurisdiction using Transferwise Compare tool; however, on average, Transferwise boasts that it will save you 8X the fees compared to banks.

The World Bank estimates that 7% of currency transfers, globally, are captured by fees. The total amount of fees charged by banks annually is estimated at $200bn. Thus there are both large opportunities to disrupt the middleman and profit handsomely.

Transferwise also has Business accounts and most recently has introduced its Borderless bank accounts. This helps increase the network of people that use its core service, while simultaneously building network effects that enable the company to continue to drop fees while maintaining profitability.

Transferwise’s original pitch, brand, and strategy were built around the concept of being a ‘peer-to-peer’ service. While that statement would be considered partially true, the key for them in the early days was to build trust with consumers.

How Transferwise did this in the early days would be considered more community-centric, as they focused on finding ‘members’ who would become early adopters, and in turn invite their friends and colleagues in exchange for a referral bonus. Below is a data visualization of their membership in 2015, expressed as a series of nodes.

It is estimated that up to 80% of Transferwise’s growth was achieved through word-of-mouth and referrals. This pattern has played out in a similar way with the Challenger Banks, and can generally be expressed as:

This pattern has played out across the Fintech industry, especially among European Fintechs. The #FintechPlaybook works because trust is the critical component of a new financial services offering, not features. Early adopters serve as conduits of trust through their own networks and help any respective company create a critical mass until the network reaches scale, at which point the size and reach of the Fintech becomes attractive from a partnership perspective to others in the industry.

Not all Fintechs follow this playbook, but many of the biggest and most popular services built a large and loyal community before they opened up commercial partnership opportunities.

Now they have partnerships with commercial banks (such as BCPE in France), with Neobanks (Monzo in the UK), and offer integrations with platforms like Nero to help build their Business customer base, which is currently growing at a 100,000 new businesses per month. Furthermore, they have a partnership with Mastercard for their Borderless account to offer those users the ability to make payments directly in their day-to-day lives.

It’s not a stretch to see how Transferwise’s strategy leads to a banking license in the not-too-distant future, targeting consumers and businesses who deal with cross-border transactions on a frequent basis and want a simple, no-fuss product that has low fees.

Earlier this year, Transferwise sold $292mn worth of stock from their existing shareholders to investors at a valuation of $3.5bn.

The company is profitable, having posted an after-tax profit for the last 3 years. Revenue growth continues at an exponential rate, but the days of 2X annual growth appear to be over, meaning the company will likely start to look for ways to harvest the significant opportunities they have for new revenue streams. Among those is the more than £1bn in deposits they have in their Borderless account, a program they launched 2 years ago.

As one of the original founders of the company is still the CEO, they appear to be less focused on an IPO and more focused on growth and profitability, despite being one of the world’s most valuable Fintechs and offering a significant long-term growth path to investors, even at these valuations.

There have been various elements to the Wise strategy over the years, but their early days focused a lot on Customer Acquisition through Organic Channels.

As discussed above, they used Referrals very strategically to help build the initial network of Wise customers, many of whom were Power Users.

Once they had the initial mass of customers and raised some initial funding, they embarked on an aggressive SEO strategy whereby they were publishing hundreds of new articles per day at one point. You can see the data below from this case study where they grew organic traffic from zero to a million and beyond from 2016 through 2020.

Wise has always branded themselves as a company that was gonna ‘take on the banks’ and bring transparency to forex and other major banking fees. It is a core part of their value proposition; therefore, they needed to build multiple Organic Channels to funnel in new customers and keep Customer Acquisition Costs (CAC) low.

Their strategy has been to retain their customers over time and generate consistent revenues in order to have profitable unit economics over the mid to long-term. The strategy has worked.

In early Q3 ’21, Wise went with a Direct Listing on the London Stock Exchange (LSE) at an $11 Billion valuation. They joined Spotify and a slew of other innovative tech names to opt for a Direct Listing, which generally is designed to give a better deal to founders, early employees, and early-stage investors compared to an IPO.

2021 was a banner year for Fintechs and Digital Banks worldwide, with virtually all major Fintechs hitting their valuation peaks in Q2 or Q3 of 2021 before falling back to earth and beyond In 2022.

The timing for Wise’s Direct Listing couldn’t have been any better, especially since by launching on the LSE they were able to generate a lot of local investor excitement in The City (London). Virtually all other major Fintechs have pursued a listing on the American stock exchanges.

One pseudo exception is Nubank, who dual-listed on both the Brazilian exchange (São Paulo Stock Exchange) and the NYSE (New York Stock Exchange) in Q4 ’21 for their IPO, before delisting from São Paulo roughly a year later.

Wise shares hit their trading peak in late Q3 ’21, as they kicked off their first few months trading publicly with a strong quarterly earnings report for Q2 ’22 with the following headline numbers:

In the final quarter of the year, they hit a few speed bumps, but they also announced the launch of Wise Assets – an investing platform – for its UK user base.

To use the new feature, users will have to pay a 0.55 per cent service fee and a 0.15 per cent fund fee to BlackRock.

Despite a rocky 4th quarter trading wise – in line with almost all Fintechs globally – Wise entered 2022 having completed a successful Direct Listing and diversifying their business model with the launch of a new revenue stream around investing.

Wise not only outperformed the tech-bellwether Nasdaq Index (-33.7% in 2022), but also virtually every other major consumer-centric Digital Bank/Fintech in 2022 with a -24.5% performance in 2022. The majority of other companies in the space lost 60% or more of their market cap.

After getting beaten down in the first half of the year like virtually all stocks – tech or otherwise – Wise had a few great quarters in the second half of the year to buck the trend. They finish the year with a market cap of about $5.8 Billion, or roughly half their IPO price. While not ideal, others like Affirm, SoFi, etc. are down more.

Wise had several setbacks in 2022:

But from mid 2022 onwards, they had some of their best quarters. Their HY (Half Year) FY23 Report (released in November 2022) outlined their 5.2 Million ‘Active Customers’ and 300,000+ ‘Active Business Customers’ on the Wise platform, globally.

At this point in the business model timeline, we can see Wise’s progression from its early days with just a standalone money-transfer product, to today where it has three core products:

Customers (both business and personal) now use Wise for more than just transferring funds, with a large % of customers using the Wise Card to actually spend money in their local market. While Wise doesn’t have a banking license, it’s recent ‘Settlement Exchange’ license from the RBA in Australia shows that it may not need one.

RBA exchange settlement accounts allow for final and irrevocable settlement through the central bank. Until last week, this had only been made available to banks. But Wise’s admission into the exclusive club shows regulators are willing to bring select non-banks into the plumbing of the payment system to improve competition against established players.

Thus we can see how Wise straddles the line between a Payments platform and a Bank.

We can see how Wise’s top-line revenue is pretty evenly distributed between Europe (dominant market), North America, the UK, and APAC (Asia Pacific). The global nature of their business and the multiple revenue streams gives Wise a significant advantage in years where the market turns down, and that is probably why they were able to outperform the sector in 2022.

Going into 2023, there are multiple different forecasts and possible scenarios given the kind of year 2022 was, but for Digital Banks and B2C Fintech in particular, the outlook does not look rosy.

The 2023 Outlook looks mixed in many ways. That’s because some firms fell down so significantly in 2022 that it will be difficult to recover, while others have failed to substantially diversify their business model enough to weather another storm. For a select few, the chaos may breed opportunity and Wise is one of those players heading into 2023.

For one thing, they have remained profitable throughout 2021 and 2022. Their FCF (Free Cashflow) remains strong because they generate a lot of cashflow, and unlike many players in the space, they don’t lend out money (ie. no ‘Provisions for Credit Losses’).

Forex transfers is a surprisingly robust niche within the Banking Model, and their ‘Revenue Take Rate’ of 0.78% (as of the last quarter) is sufficient to continue generating positive cashflow given the volumes they do cross-border and to some extent locally.

Interestingly, despite the growing volume of customer deposits they have in both Personal and Business accounts (up 88% YoY combined), they don’t optimize for ‘Interest Income’ and instead prefer to pass those savings onto their customers.

All told, this is very unique business model that has been surprisingly well-crafted to withstand shocks in the broader macro environment, whether it be a potential recession, more inflation, or a consumer debt crisis.

70% of customers still join from word-of-mouth and there is generally a high satisfaction among customers, both business and personal. Thus they don’t need to constantly invest large sums into marketing to keep the wheel turning. Their platform also has enough functionality to retain customers long-term.

Overall, Wise often slides under the radar in the global conversations about ‘the disruptors’ in Fintech/Digital Banking. As we have seen above, their model straddles between a bank and a payment processor, with the bulk of their revenue still coming from forex transfers.

As the market evolves, however, Wise may be able to capitalize on its position as a profitable, publicly-traded Fintech and open new gateways. Not that they don’t face stiff competition, au contraire. But they seem to better positioned to withstand shocks and capitalize on tech-driven opportunities than many of their competitors, both incumbents and fellow Fintechs.