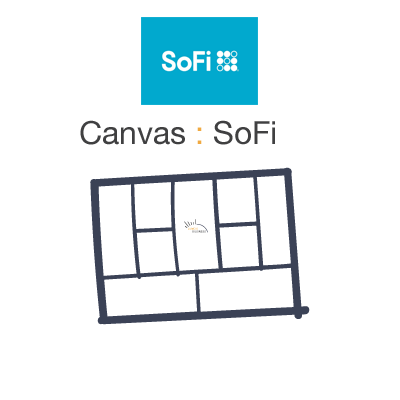 SoFi (Social Finance) was started in the post-GFC (Global Financial Crisis) era as a challenger model to the Mega Banks before the concept of challenger banks even existed.

HENRYs (High-Earning-Not-Rich-Yet) Millennials were the market that SoFi broke-in with when they launched in 2009. Back then, and to this day, you had to be a ‘Member’ to join SoFi.

“HENRYs are still young—between 25 and 34—and are still moving up the career ladder. They represent the top 20 percent of households in terms of income, earning anywhere between $100,000 and $250,000 a year. Because they earn more than the middle class, HENRYs have more spending power and could afford more expensive purchases.

They initially targeted graduate students at Ivy League Universities from the ‘HENRY’ segment for student loans, and expanded the category of products to include mortgages, personal loans, and other banking products, all the while offering ‘membership-grade’ customer service and better rates than competing entities (the Mega Banks).

The ‘HENRY’ name has now been replaced with HENWS (High Earning Not Well Served) for those earning $100K+, but the concept remains the same.

How does SoFi make money?

The more relationship-based strategy – as opposed to the modern transactional strategy in banking – has propelled SoFi from a company that started up on the West Coast in a Graduate School to publicly-traded company that is now challenging the Wall Street banks.

In other words, the principal way that SoFi makes money is by lending to its customers, who are lower-risk than average U.S. borrowers from a credit-risk perspective. While they are not yet officially a bank, they received the green light to get their national bank charter in Q4 last year, and acquired a Community Bank in Q1 of this year to speed up the process. Once they officially become a bank, they can then take in customer deposits and loan out against those, rather than relying on 3rd-party underwriters as they do now.

A national bank charter will give SoFi the ability to accept deposits and make loans that use SoFi’s member deposits as opposed to funding its loan offerings as a nonbank, by contracting external underwriters at a premium.

As a proxy, the average NIM for U.S. Community Banks in Q2 2020 was 3.27% vs. 2.68% for the U.S Mega Banks, which happen to be the lowest levels in reported history according to the FDIC, largely due to declining interest rates and inflation expectations. Nonetheless, a 3% NIM starting range is the initial expectation for SoFi once they have their bank charter and are fully-insured and ready to take deposits.

As we can see from the above ‘Investor Call Deck’ that was released in late 2020 ahead of their Q1 2021 SPAC, Lending accounts for roughly 83% of SoFi’s current revenue as of the end of 2020.

Another 17% comes from the Tech Platform Galileo (acquired by SoFi for $1.2 Billion in Q2 2020), which is the underlying infrastructure that powers not only SoFi, but also other challenger banks like Chime and trading platforms like Robinhood. As of Q1 ’21, Galileo powered more than 70M Fintech accounts.

While we don’t know the exact mechanics of the Galileo business model (they have Galileo Instant and Galileo Pro), it is a hybrid between a payment-processing model (based on interchange fees) and SAAS model (based around features).

With Galileo’s principal competitor – Marqeta – scheduled to go public in June 2021, we can learn a lot about the mechanics of this type of Fintech Infrastructure business model between interchange fees and API-based SAAS revenue streams via their S-1.

We can see that SoFi is planning to evolve its business model over the next several years to capture much more revenue from Financial Services, presumably based on its ability to cross-sell new products to its Member base once it can fully operate as a bank. None of this should be surprising, as this has always been the vision communicated by SoFi executives since inception.

“There is going to be a seismic redistribution of market cap in the banking world,” he says. “They won’t see it coming until it’s done.” SoFi CEO

The strength of this model is relative to potential ARPU upside vs. limiting CAC, a big cost for the majority of Fintechs.

What makes SoFi unique from most other challenger banks is the premise of Membership, which is much more of a community-centric strategy as opposed to a commercial-partner strategy seen across the banking world, from both disruptors and incumbents.

Individuals must be accepted in order to become SoFi Members. The segmentation, from SoFi’s perspective, allows them to identify higher-income individuals (HENWS) who present a lower credit risk. SoFi offers them much more value than competing banks and challengers from a lending perspective.

This type of exclusivity is an atypical strategy in the current environment, but the goal is to create a more social brand around finance (hence the name ‘Social Finance’).

As seen above, beyond Community features like a Facebook Group, they offer Career Coaching, Estate Planning, and other services that in the in long run contribute to both the ‘financial health’ of the consumer and the strength of their balance sheet. Remembering that SoFi started out of the embers of the 2008 Subprime Mortgage meltdown when NINJA (No Income No Job) loans were in vogue, SoFi wants to make sure that it limits any related risks to its customers suffering from unemployment or other adversity.

Obviously SoFi wants to make money and compete with the Wall Street Mega Banks like all other challenger banks. They just have a very unique and compelling way of doing that, which is to limit credit risk and lower Customer Acquisitions Cost (CAC) by cross-selling multiple products to its Membership base. The Membership benefits directly serve this strategy.

Leveraging the financial services productivity loop (“FSPL”) strategy where building TRUST and a “RELATIONSHIP” in the 1st product drives success in the next, results in Highest LTV & Lowest CAC resulting in our competitive advantage. Best unit economics from lower CAC, lower cost from vertical integration win

SoFi launched a SPAC (Special Purpose Acquisition Company) with Chamath in Q1 2021 under the ticker IPOE.

The SPAC merger is set to officially complete next week, when SoFi will begin trading on the Nasdaq under the SOFI ticker.

Based on current trading, the company is valued ~$17 Billion. They have raised about $2.5 Billion collectively leading up to the SPAC, while the SPAC itself provided the company with about $2.4 Billion in cash, leaving the company well-capitalized for future growth.

Membership-based Challenger Bank offering Members a suite of loan products and other benefits:

Playing the long-game of LTV (Lifetime Value), which is a function of customer loyalty and repeat revenue-generation, is the best way to win any hyper-competitive consumer-centric market.

The acquisition of Galileo in Q2 2020 prevents SoFi from having to form a commercial partnership with the one company that ends up becoming their biggest asset going forward as they take on the banks. The technology platform behind SoFi, along with all the corresponding data produced, help the company achieve ‘vertical integration’ and scale-up the business across multiple different product portfolios.

The company also has commercial partners to power specific products. Examples include education platform Coursera for a course on the ‘Fundamentals of Personal Finance‘ and market-data platform Xignite to power the ‘SoFi Invest’ module, among other partnerships