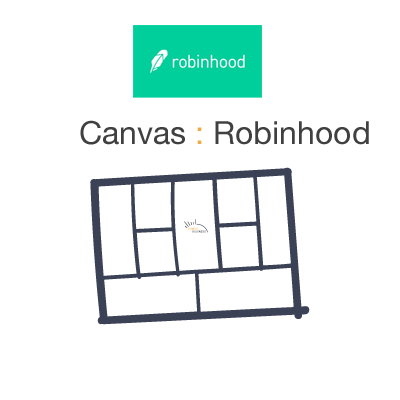 Thanks to meme stocks, Crypto Mania, and IPO democratization, Robinhood has been one disruptor that never ceases to be part of the Fintech news cycle these days.

Since the company charges no commissions on trades, we turn to the Business Model Canvas to map out how they make money.

We started hearing a bit about Robinhood last year due to its business model that is equally controversial as it is disruptive. Then the GME (Gamestop) story hit the wires, combined with the rise of the other meme stocks such as AMC (AMC) and BB (Blackberry), which were being pumped up on the r/wallstreetbets Reddits boards by its ‘diamond hands‘ traders. Suddenly, Robinhood was not only in the press, but also in the halls of Congress.

In a banner year, the company has seemingly shaken off a mix of scandals, tragedies, and moral inquests as it prepares to IPO and propel itself into the big leagues of brokerages against competitors like Charles Schwab (Ticker: SCHW) and other discount brokerages.

With technology changing the structure of trading and pushing down many costs, the traditional brokerage business model has come been replaced with models where companies like Robinhood and Charles Schwab charge $0 for trades but make money in other places.

These types of platform businesses require huge scale, but can be extremely lucrative, as the trading model converges into other areas of financial services such as asset management and IPOs.

How does Robinhood make money?

Since Robinhood does not make money off of trading commissions, it has to generate money elsewhere. PFOF (Payment For OrderFlow) is a revenue model that routes orders to high-frequency trading firms, who then go on to match buyers and sellers and profit from the spread. Given that PFOF is not legal in all jurisdictions outside of the United States – most notably Canada, Australia and the UK – it is a business model that is very difficult to scale globally, but also to replicate.

It routes customer trades to high-frequency trading companies such as Virtu and Citadel Securities, which pay Robinhood to execute that trade. Robinhood makes a commission on the back end, without charging customers upfront.

The company makes more than 50% of its revenue from PFOF, but how much is to be determined.

The other large % of their revenue comes from interest income related uninvested cash balances in customer accounts.

The company has said it makes more than half of its money from payment for order flow, much more than brokers like Charles Schwab (SCHW), which makes a higher percentage on other activities, such as lending out customer deposits.

Compared to more traditional brokerages that make money on lending to customers on margin (interest income) and other advisory-related fees, Robinhood is using the PFOF revenue model to build its platform and expand into other areas of the market.

Robinhood Crypto is one such avenue where they are planning to compete with mainstream U.S. Cryptocurrency brokerages such as Coinbase.

Then there is Robinhood Gold, a $5 monthly subscription service that offers enhanced trading benefits such as professional research, Level II data and higher deposit limits.

Even excluding crypto, Robinhood likely made more than $400 million in the first quarter, after including money it makes from enhanced services like Robinhood Gold.

Ahead of an anticipated Q3 ’21 IPO, the company continues rolling out new services for its members, such as IPO Access, which seeks to ‘democratize IPOs’ by giving access to its users regardless of their assets through deals offered by its underwriting partners. Consistent with its overall model, Robinhood does not charge its users for this service but rather takes a fee from the underwriters.

They are also rolling out Cash Management which enables users to spend money using their snazzy debit card and earn interest (0.3% APY) from ‘swept cash’ balances. Consistent with most similar models, there is an interchange fee that occurs based on transactions, and the NIM (Net Interest Margin) contributes to interest income.

Given that they are a digital-only platform business with a Captive Ecosystem, there will be ample opportunities in the future for Robinhood to continue to roll out new products and develop new revenue streams.

Robinhood has that type of fairytale, feel-good beginning to it, which is in part what has led it having, by many accounts, a ‘cult-like following.’

Robinhood was popular even before launch. In 2014, 340,000 people had signed up to the app’s waitlist, by March 2015 (a month before it launched), that figure had doubled to 700,000. Fans from Europe, Australia and South America filled Robinhood’s forums, pleading for the app to launch in their country.

By the time that they actually launched, they had more than 1 Million users who had requested early access thanks to a relatively simple value proposition.

The company relied on viral social media posts, reddit posts, and a referral-based incentive program to grow a 1 Million+ community before they even launched.

In this way, Robinhood operated with a 100% community-centric strategy in their early days. They played to their users’ desires by offering them the ability to trade small amounts ($1,000) on margin while they waited for their deposits to clear, and added other ‘gamified’ features to the trading UX (User Experience) to cement Robinhood as a next-gen trading platform.

These types of features alone have been the source of some controversy, with some comparing the company’s platform to a casino.

Barnes described Robinhood as “more financial entertainment than investment management or wealth building. What they’ve created is an incredibly fun, exciting, legal casino in your pocket.”

Furthermore, the fact that they took on relatively large amounts of Venture Capital (VC) Funding prior to launch ($16 Million in two separate rounds) and cozied up to hedge funds in order to build a ‘zero-commission’ model for consumers meant it was inevitable that they would become more corporate and be forced into a more commercially-driven strategy in the future.

Given the string of controversies we have seen with the company around stopping trades for meme stocks, being hauled in front of Congress, and generally being branded as a Wall Street 2.0 type of firm, there is no going back to its community roots.

With somewhere between 15 and 20 Million users (depending on the source), the company’s strategy is now geared around monetization of the current user base through the creation of all the new products we have seen above: Robinhood Gold, Crypto trading, Cash Management, and IPO Access. They are no longer just a trading platform, but a fully-fledged brokerage 2.0 model for a new generation of traders. They will likely continue to grow and expand their user base, but growth going forward will be much more competitive than it was for the company in is early years.

The company confidentially filed its S-1 earlier this year to the SEC, meaning that they are preparing to IPO in the next month or two at a valuation rumoured to be in the $40 – $50 Billion range. In a year of already exciting IPOs and Direct Listings, Robinhood is one of the most anticipated listings of all.

The largest valuation risks in a potential Robinhood IPO include the sustainability of a recent resurgence in trading activity, and regulators taking another look at Robinhood’s key revenue source of payment for order flow.

Given some of the controversies and potential future roadblocks we have talked about above, there is a lot that could shift between now and the time they list.

After all, the company did raise $660 Million in September 2020 at a $11.7 Billion valuation, meaning that the IPO may represent a markup of 3 – 4X in just the last 9 months alone.

When the S-1 is released publicly prior to public listing, individuals and investors alike can gain more information on growth rates, financial data, and insights into the proposed valuation.