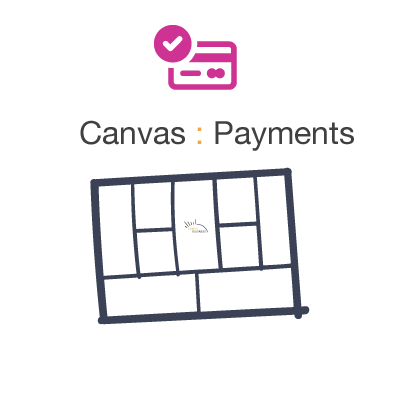 Payments is a complex, fragmented, multi-trillion dollar industry that is currently in the throes of disruption.

Behind it all is a business model, which is why we dive into the Business Model Canvas behind Payments and the associated innovations.

Whenever a customer makes a card payment – either online or offline, via debit or credit card – there is a complex array of players in the background who are moving the money behind the scenes from the Issuing Bank (the consumer’s bank account) to the Merchant Bank (the business’s bank account) via the Card Networks (Visa, Mastercard, etc.) and Payment Processors (multiple players).

Who makes what cut (the “Take Rate”) is a constantly-evolving puzzle, which is why we put together a business model canvas to create a simplified view of how this ecosystem stacks together, generally.

How do Payment Processors make money?

To start with, the consumer never pays a fee on the payment processing side of any transaction, it is always the merchant who pays. The Card Networks set the fee structure, which gets into a complex array of factors to try and break down based on regulations, economic conditions, etc. While difficult to pin consistent averages, we do know that credit card interchange fees are significantly higher than debit card interchange fees.

In the United States, the average interchange rate is around 0.3% for debit cards and 1.8% for credit cards. However, we’d caution you that these numbers have very little value due to the enormous range of possible rates under which any given transaction might fall.

An American study in 2019 showed that the average transaction fee was $0.23 on debit card transactions.

The fee structure is set by the Card Networks, but between debit and credit card transactions, the full fee breakdown depends on factors such as ‘card-present’ (in-store transactions) vs. ‘card-not present’ (eCommerce) based on the perceived fraud risks for each transaction. The higher the fraud risk, the higher the interchange fees. Then there are factors such as whether the payment was done by tap vs. signature on credit, for example, or whether or not pin is used on debit.

Interchange fees are set by the major credit card associations (Visa, Mastercard, American Express, and Discover). Each association publishes a schedule of fees that break transactions down according to categories such as card-present vs. card-not-present, business type, ticket size, credit card vs. debit card, and many others.

With the size of the space globally – $2 Trillion in annual revenues – and growth lines that are roughly synced with global GDP plus a little (5 – 8% CAGR), the world’s biggest financial institutions are among the leaders in the space. But it also a space where the threads of disruption are being weaved. Startups in the space such as Square, Stripe, Adyen and others have essentially become household names.

In terms of a rough breakdown in each category.

Merchant Acquirer – Megabanks like JP Morgan Chase who work with big Payments firms like Fiserv and FIN, and then the Fintech disruptors who are now on the Acquiring end of many eCommerce transactions like Paypal, Stripe, Square, etc. Then there are the ISO (Independent Sales Organizations) who often work between the banks and other acquirers, and take a fee in the transaction.

ISOs make money in a number of ways—similar to the number of functions they perform. Their fees also vary, depending on the contracts they have. ISOs are paid the remainder of the merchant discount after the card issuer, network, and merchant acquirers get theirs.

Merchant Processor – The major Payments firms continue to dominate the majority of the merchant processing market, but Fintechs such as Adyen have emerged in the space and command a significant % of market share

Issuing Bank & Processor – the vast majority of Issuing Banks are the Megabanks in their respective markets. They work in partnership with many of the Payment firms and their subsidiaries on the processing end of the transaction.

Below is a rough visual of this, presuming a credit card transaction of $100 done online.

As we can see, there is a lot of money to be made in payments on Interchange Fees, which is why we see so much competition and potential disruption.

These are all very large commercial partnerships between multiple entities, each working to establish their piece of the pie in a $Trillion industry with several billion transactions happening each year.

The key to the Payments Industry specifically though, is that their major customer is the merchant. In fact, in 2020, with 75% of all new revenue growth in the merchant processing space coming from SMEs (Small & Medium Enterprises) in the last 3 years.

Incumbents face different pressures than Disruptors, as one channel is typically via in-store payments (retail, grocery, etc.) while the other channel is usually via eCommerce. The shift in the pandemic to digital creates higher costs for merchants (an estimated incremental rise of 6 to 10%), however it also creates benefits for the merchant as they gain access to a greater customer base. Incumbents, on the other hand, face increased margin pressure due to the need to share with their channel partners (ISOs, etc).

These end-to-end shifts in the Payments industry create the need for new partnership models, as each portion of the stack tries to gain greater market share while at the same time preserving margin.

The Disruptors have seen their share prices skyrocket in the last year because of this rapid shift to digital payments brought on the pandemic. That has created a new pressure on Incumbents to respond, and with so much revenue at stake across the value chain, this will likely lead to aggressive partnership-driven strategies directed towards acquiring new merchants.

The vast majority of the major companies in the Payments space are publicly-traded on the indices.

As market conditions change, there will likely be big swings in the Market Caps of Incumbents and Disruptors alike, not to mention consolidation and other strategic moves across the value chain to increase market share and preserve margins.

Allows merchants to accept payments via in-store and online channels, from both credit and debit cards, globally.