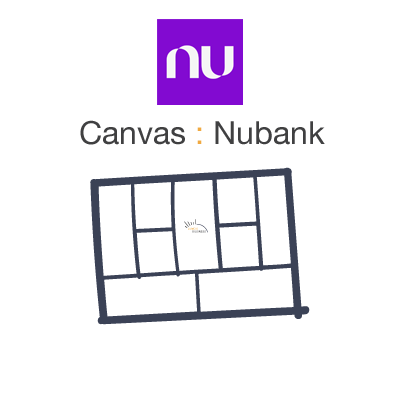 If one of the world’s most infamous old-school investors is investing in a challenger bank, then you know we are reaching an inflection point in the market.

The intrigue of the newly-minted $30 Billion Nubank goes a level further when you realize they are a Brazilian challenger bank. That’s why we dig into the Business Model Canvas behind Nubank.

Warren Buffet made waves in the market this week when it was announced that Berkshire Hathway had invested $500 Million in Brazilian-based Nubank as an extension to the Series G at a valuation of $30 Billion. Nubank’s stock has risen – so to speak – on the back of the digital acceleration in Fintech and payments brought on by the pandemic, combined with the abysmal state of financial services in Brazil, a country with 200 million+ citizens.

One of the world’s largest challenger banks, it has amassed 40 million clients across Brazil, Mexico and Colombia.

Even with the rampant growth and impressive user numbers across Latin America, a $30 Billion valuation is on par with some of the other leaders in the challenger banking space like Chime. There is no emerging market discount here, which means that beneath the surface there is some serious money being made by the upstart digital-only bank started in 2013.

Part of the deal with being a challenger in the banking sector is to challenge the old guard of banking with new products, streamlined digital interfaces, and some form of a disruptive business model. We saw some of the earlier challenger banks in the UK and Europe test a subscription business model, which has had limited success. Chime – the leader in the U.S. market – has a debit-based payment processing model, along with an innovative credit product. SoFi has created a competitive, members-only lending model combined with a cloud-based platform for other Fintechs in Galileo.

Brex has opened-up the business credit and cash management category with a suite of products. All of these companies, however, operate in “developed” economies with competitive, and generally open banking sectors.

Brazil is an oligopoly where the incumbent banks rule the roost. The ‘Big 5 of Brazilian Banking’ dominate everything to do with retail banking, credit, and asset management.

Beyond controlling the vast majority of the country’s assets, they make absurd profits because of the insane NIM (Net Interest Margin) margins they are afforded, in a country where some consumers paying north of 450% in interest per year.

How does Nubank make money?

Nubank’s primary revenue streams are built around the company’s credit card business. They make money each and every time their customers tap their credit cards in-store or make a payment online (#Interchange Fees) and the earn revenue on the carried credit-card balances of their customers based on the interest rates applied to those balances (#InterestIncome).

Like other players in the credit card side of payment processing, there is a lot of money to be made on interchange fees for issuing banks during the course of each credit card transaction. The merchant pays the fees (~2-3% on average) and those fees are split across the stack of banks, cards networks, and processors.

Interest Income is then earned on top of the carried balance that consumers pay, in what is typically referred to as the APR (Average Percentage Rate) of the interest rate.

The Nubank credit card has no annual fees. As Brazil is famous for having ’10X sem juros’ (or “10 payments, no interest”), consumers are used to paying in installments, something not dissimilar in function to BNPL (Buy Now Pay Later). Nubank customers pay interest on installments.

The interest rates are cheaper than the average in Brazil, but that does not make them cheap.

As of Q3 2020, Nubank had gained approximately 5% of the credit card market share in the Brazilian market.

The company also has a low/no-fee debit account that pays out above-average APY (Average Percent Yield) interest to savers, a strategy that has been common with challengers worldwide. That’s because they will make Loans to other customers and pocket the NIM spread between the two rates (the rate they pay savers vs. the rate they charge to the customers taking the loan).

The company recently announced they now have more than 35 million users in Brazil alone, meaning they are growing like wildfire.

In Fintech, we have seen a divergence among challenger brands from a strategy perspective; some are more community-centric, while others are more commercial and work with more established corporate partners to gain market shares.

Nubank is slightly different as a comparable because Brazil is a country with a high mobile penetration, large % of unbanked customers, and a large number of people who are dissatisfied with the status quo of retail banking. Not to mention, because of the prohibitively high interest rates, a much lower % of consumers using credit cards compared to the United States and other Western economies. It took an outsiders viewpoint to even begin the journey to build Nubank into what it is now.

Nubank could never have been started by a local. . . . It required a Silicon Valley investor who has seen this story of the tiny ant going against the elephant and succeeding. A Latin American investor sees that and says, ‘No way, the elephant is going to crush you.’ ”

The whole strategy from the outset needed to be divergent compared to other challenger banks as no company could just walk into Brazil and start offering bank accounts.

Nubank couldn’t start with bank accounts because it faced a high hurdle to getting a bank charter—a Brazilian constitutional provision barring foreign bank ownership. But it didn’t need a banking license to offer credit cards.

Their strategy in the early days was built on word-of-mouth, so in that sense Nubank did build an early community of users who became promoters and got the name out there.

Rather than burn scarce cash on marketing, Nubank used the “velvet rope” strategy common in Silicon Valley—at the start you had to be invited by a friend to apply for its credit card. Faux exclusivity aside, the appeal for Brazilians was obvious: Nubank charged no annual fee and handled applications entirely through its app.

The combination of the smooth digital interface, no fee model, and relatively lower hurdle/rates for credit cards (they built their own proprietary credit model), helped propel Nubank into prominence even in the midst of a huge economic crisis.

At the end of 2014, Brazil slipped into a deep recession. Yet just 12 months later, more than a million people had applied for a spot on the Nubank card’s waiting list. To protect itself from losses, Nubank approved only 20% of applicants and gave some ultralow spending limits of $14, raising that only if payments were timely.

The whole strategy enabled them to reach 1 million accepted credit card users by 2016, almost all of which were driven by referrals and word-of-mouth. After the 1st million users, the company began raising progressively larger rounds and scaling up the user-acquisition strategy.

After the company received their banking license in mid 2017, they were able to begin scaling up the business, with almost half of its credit card users also signing up for the Digital Account within five months of launching.

Finally, in May 2017, after a presidential decree gave it an exemption from foreign ownership rules, Nubank received a Brazilian banking license. Now it could offer its checking and savings accounts—all digital, naturally.

The loyalty they have generated with their customers is evident in their NPS scores, and bodes well for the next phase of their strategy, which is to start plugging other banking ‘modules’ into their platform and building new revenue streams.

They launched a life-insurance product in 2020 – Nubank Vida, underwritten by Chubb. They also acquired Easynvest, which had 1.5 million users at the time of acquisition in Sept. 2020. With the new round of financing, they will be able to start rolling out some form of investment product (see SoFi as a reference) that is complementary to their current product portfolio.

With 40 million+ users and growing, across 3 countries, Nubank has a captive ecosystem that it can start to test new products on and generate new sources of revenue. Even with increasing competition, the switching costs are high; meanwhile demand for digital-first banking products continues to grow exponentially across Latin America.

From the first seed round in June of 2013 until the latest Series G – which including Berkshire’s $500 Million totalled $1.15 Billion – the company has raised more than $2 Billion USD.

The company is now well capitalized, and despite indicating they will one day list publicly, it does not appear the listing will happen in 2021. Nevertheless, the $30 Billion valuation puts the Nubank in the big leagues among challenger banks, globally, and the pressure to continue growing profitability will escalate between now and the time they list.

Is The Nucoin Token a Smart Strategy for Nubank?

How does Nubank achieve a low CAC (Customer Acquisition Cost)?

Where does Nubank fit into the Future of Banking?