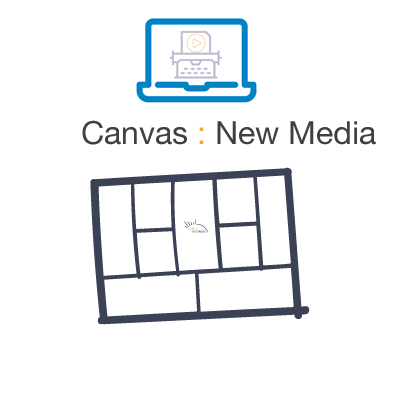 The News is Fake, but the (information) War is real. Censorship has been taken to a new level in 2021, and as a result the market is responding by looking for new publishing/media models.

Here, we look at the New Media Business Model Canvas and try to gain insight into where this market goes next.

How does Media make money?

Media has been around since the dawn of time. It’s evolution has been charted to the (r)evolutions in mediums, such as the printing press and more recently the internet.

When you picked up a newspaper in the ’90s, it was pretty easy to spot their business model: advertising.

Classic seeing that Ferrari Ad there in the bottom right in Canada’s Financial Post from the ’90s. Advertisers paid based on the circulation, which was all completely physical at that point.

Let’s say the average newspaper cost $1 on the street or $15 per month for subscribers – the math to understand the mechanics of the business model for a media publisher in those days could be done on the back of napkin.

Then came the Internet. And with the Internet in the mid-2000s came the advent of social media, which themselves effectively became publishers (a debate for another time). The shift from print to digital was not linear, as eyeballs didn’t always convert to enough cashflow to monetize a user base in the same way print did (print advertising costs came way down, engagement dropped off a cliff).

Furthermore, the creation of a subscriber base online was difficult for a couple of reasons:

The combination of new publishing platforms and tools combined with the new realization of how biased (#FakeNews) media is – on both sides of the political spectrum – means that we may be on the verge of a golden era of business model innovation in media.

Beyond blogging platforms with Ad plugins (ie. WordPress) and video/podcast networks that insert Ads into media clips, a new generation of platforms is emerging around subscriptions.

Not that advertising will fall by the wayside. But if, in effect, subscription platforms delivering newsletters/emails to members is the equivalent of mailmen delivering papers to mailboxes then the whole media model will shift dramatically.

Substack is a rapidly-growing, VC-funded ($17.4 Million) to date. The platform started out as a better way to create a newsletter service for subscribers but is quickly evolving to a publishing platform. It is easy enough to spot a writer on substack because the ‘substack.domain.com’ is present on all its domains, there is no white-label product.

As noted (not-so-gently) below, Substack takes 10% of its writers’ monthly subscription fees. Let’s say a writer charges $10 to subscribe to their newsletter, Substack would take $1 per subscriber, per month. Not a bad business model at scale and many writers and analysts would argue that they wouldn’t have a self-sustaining business if it wasn’t for Substack.

Their target is not necessarily the top 10% of writers, but rather individual writers in certain niches trying to build their own business off their audience rather than being employed by a media company.

The platform, which has more than 250,000 paying subscribers, isn’t just giving the writers tools to make a living; it’s attempting to popularize and normalize an entirely individualized form of freelance journalism. Substack, and those who have sunk money into it, are the ones who stand to profit from the rapid fragmentation of the mediascape, skimming their 10 percent tithe from every transaction.

Ghost is another publishing platform with a similar aim (“turn your audience into a business”) but a different business model – they charge a flat fee (ie. from $29 – $199 per month) rather than a % of subscription revenue. They are branded as an ‘alternative to Medium‘ by some pundits, with the obvious difference being the ability to monetize the publication.

A media brand or community can still create a subscriber/membership base on Ghost, as the platform is centered around publishing features, but enables membership payments and all the features that come with running a subscription-based media model.

The Ghost Foundation was bootstrapped off of a Kickstarter Campaign in 2013, so they have a bit of a different vibe than Substack. At 6,271 ‘Active Customers’ we can see that this ‘new media’ ecosystem is just getting started (obviously not all those customers are media brands/journalists, the # is simply a proxy in the context of this post).

There are MANY other possible publishing platforms and permutations of different services that a media brand could use to make money, but we are going to focus on these two services for the purpose of this post.

Most publishing platforms offer plugins to enable embedded Advertising (usually via Google AdSense) or Affiliate networks (multiple). That is why many independent media companies start on a platform like WordPress – to create content that can be monetized via Ads.

Of the two platforms listed above, Substack does not currently offer any Advertising integrations, while Ghost does. Substack’s platform does show some writers getting sponsorships; a more subtle way of advertising, but still advertising nonetheless.

The obvious unbundling of the news created by these platforms/trends creates another set of problems in the mid-term, but we will save that for a future post on Business Model Innovation.

By now many people have realized that part of the reason news media is so biased is because of how it is funded. Special interest groups and even governments can actively (or sometimes covertly) pay to highlight or obscure certain stories to suit a narrative. While a media business can be losing $Millions, sometimes it still serves its purpose to a select group of people.

That doesn’t mean that a Commercial Partner Strategy doesn’t make sense in many situations. But for media to regain its credibility and trust with the public, it needs to take a Community-Centric approach and be transparent about both its business model and any funding it receives.

Yes, a media business can still successfully be driven by advertisements and be community-centric, but most ad-driven media sites are not reader-driven. They optimize for impressions and create clickbait content that feeds their need for traffic.

Sometimes we see Sponsored Content as an innovative way to bridge the gap between this type of clickbait content and an advertising model, but that can also be a slippery slope depending on the content and audience size of the publication. Overall, the digital-media advertising media model as we know it is collapsing:

Substack is a pragmatic response to one issue plaguing an industry in crisis – a collapsing ad-based revenue model. Rather than propose more voodoo innovation, it addresses the issue head on with the straightforward transaction of a subscription

A community-centric, subscription-based media model aligns the incentives between both readers and the employees/owners of the business. Substack and Ghost – while not perfect – are powerful new tools to create a subscriber/membership base that can support a small team in the early stages.

We are not talking about trying to create new-media empires at this point, but rather multiple independent, trustworthy sites and media brands across all segments of society where information is important. This doesn’t just include news. It includes art, philosophy, sports, energy, business, travel, and just about every other major topic you can think of.

None of this is to negate the power of advertising in relation to the media business model. It always has been – and always will be – core to a media business’s revenue generation as a whole. But in a world craving integrity and transparency in the content they are reading, subscription platforms have created a bridge from the old digital media models of clicks, to the new media model of members.

There will be a continuum that enables some innovative media upstarts to do both, but aligning incentives is critical to creating trust in media again.

If you spend enough time analyzing ‘new media’ platforms you will see that donations often supplement ad revenue (in lieu of subscriptions); or, many other platforms will create subscribers on other platforms like Patreon that they then pull back onto their own channels.

Both are, in effect, either a direct or indirect attempt at creating a subscriber base to the native publication (on-channel).

The creativity and tenacity deployed by new media outlets to drive revenue is admirable! From a business model perspective, however, we are looking at the ‘net model’ so to speak. Wherever a ‘patchwork’ is used in place of the ideal solution (donations +/or Patreon), we will expect technological and business model innovation to fill the gap over time, and it seems like that’s where we are at today.

We outlined the contrast in the way that the two platforms – Substack and Ghost – are funded above. One has received several $million from American venture capitalists in 2019, the other raised about £200,000 in 2013 on Kickstarter and built organically from there.

Both are high-quality businesses/platforms. Despite the way they are funded and their relative valuations, both are trying to scale their offerings to writers and content creators in desperate need of new publishing tools worldwide.

Valuation will become more important in the future as more platforms enter the space. Recently we have seen major movement in the market with Twitter’s acquisition of Revue, signalling its intent to create a competitive product to Substack; this is just one example of the market is heating up.

As an additional sweetener right out of the gate, the company dropped the amount the service charges from 6 percent of subscription revenue to 5 percent, which is half what Substack takes.

When we consider that a subscription platform like Morning Brew (which built its own custom stack) was sold for $75 Million in Q4 2020, you can see how the value of these platforms can go exponential in the future. At the time of its sale, Morning Brew had 2.5 Million Subs for its main newsletter, and 3 Million Subs combined for its other 3 newsletters.

As there are going to be all different types of writers and media businesses joining these platforms — each with different objectives and audiences – it is difficult to come up with a standardized set of Analytics/Metrics to measure success on right away.

Obviously, the first goal for a new publisher is to break-even cost-wise, which equates to simple math around # of Subscribers X $Revenue per Sub.

Subscription pricing is important, which is why Substack’s model is particularly interesting. Substack seem to be optimized for writers who want to write premium content and not worry about much else (ie. certain features, substack domain).

Whereas Ghost seems to have many more features which may help a writer/brand pull in more subscribers and build the audience through multiple channels, Substack seems ideal in the early stages for those who already have an audience.

Each platform will have a certain set of metrics/analytics.

Breaking out one or two key Analytics from this data, and optimizing the strategy around these is better than trying to do everything at once. In this context, a few examples are:

Once you acquire a subscriber, the last thing you want is to lose them. Loyalty may also be related to pricing, which is why many more established media brands put out subscription offers to lure readers in and hope they forget about it and just subscribe at the full price down the road.

In such an early-stage market, it is difficult to gauge what Metrics/Analytics will be best for which writer/media business. These Metrics/Analytics must be considered against the overarching strategy, which may in some cases include advertising and be optimized for reach rather than subscriber revenue. To each their own in the new media game.