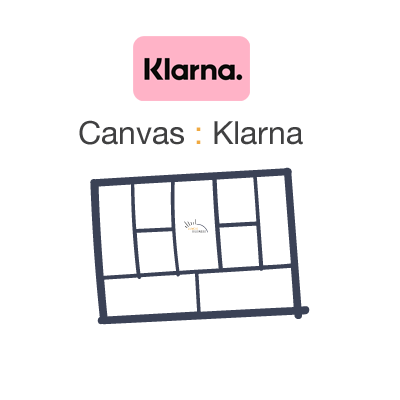 Founded in 2005, Swedish-based Klarna is the original BNPL (buy-now-pay-later) player. They are the biggest by volume in the world and are planning to IPO in the latter half of 2021.

We dig into the Business Model Canvas behind Klarna.

Klarna – The Pioneer of BNPL Payments

Klarna was the pioneer of the BNPL industry – the OG (Original Gangsta) of what has now becoming a mult-billion dollar industry.

BNPL allows consumers to ‘Pay in 4’ interest-free, no-fee installment payments – 1 payment every 2 weeks until the amount is repaid. The pain point is both on the merchant side of transaction and the consumer side of the transaction.

Merchants like it because it is partially a Marketing Cost that brings in additional revenue in the form of higher Conversion Rates, AOV (Average Order Value), and Loyalty; and Merchants also loathe the Interchange Fee typically charged by banks and payments networks.

Consumers like it because they can make purchases with no interest (assuming they pay back on time).

In the world’s fastest-growing BNPL market – the US – Klarna is # among the new disruptors, with Paypal and its nearly 400 Million Active Users currently leading the pack.

As we will see below, each BNPL player is somewhat different, so we look at the Klarna Business Model Canvas in the context of this nascent industry that currently only accounts for only about 1% of the transaction volume mix, but is expected to grow to more than $1 Trillion in transaction volume by 2025.

How does Klarna make money?

Since BNPL is a hybrid between a Credit (interest rates) and a Payments (interchange fees) product, Klarna makes its money by charging merchants a % of each transaction that includes the payment processing fee and the fee to actually loan the customer the money.

Credit card applications have dropped 50 percent while over $100 billion worth of credit card debt has been paid off. Consumers are [recognising] that traditional credit cards are not a great business model.

Klarna – like Affirm – offers both the typical Installments option (4 payments, interest free) for smaller purchases and the Financing option that functions more like a loan product and allows the consumer to make payments, on typically larger purchases) over 36 months. Klarna also has its own ‘Pay in 30 Days‘ product that allows customers to have a 30-day window to pay for the product given the potential for returns, etc.

Of the four major players in the market – Paypal, Klarna, Affirm, and Afterpay – Klarna and Affirm are unique in that they offer higher limits ($10,000 and $30,000 respectively) for higher-value merchants, but perform some form of soft credit checkat a minimum.

Paypal and Afterpay, on the other hand, are capped ($600 and $2,000 respectively) and rely less on credit checks. These merchants offer more of a pureplay BNPL product (4 interest-free payments over 2 weeks), whereas Klarna and Affirm are becoming progressively more like lenders and banks.

It is no secret that Klarna is the most known BNPL player in the European market, and with over 250.000 merchants

Klarna has its roots in Europe, where the market is also rapidly growing. The characteristics of the US market and the EU market are different; however, because BNPL players like Klarna are looking progressively more like Challenger Banks, the home-market advantage starts to matter.

Klarna began offering a bank account in Germany … consumers will get a German IBAN number and can access ATMs and direct deposit. The launch shows Klarna has potential to follow a similar path to Revolut, N26 and Monzo, all European payment companies that expanded into digital financial services while potentially exploiting innovation and market gaps at retail banks and credit unions.

With its ~90 Million users and 250,000+ merchants in more than 17 countries, the company has the ability to scale-up quickly to compete with other Challengers. The 1-2 combo between a credit and savings product may help them compete on the margins with other Challengers while maintaining a competitive advantage due to the high take rates of BNPL players.

Given that each major BNPL players’ main customers are merchants – from a business model perspective – each one has a set of unique partnerships with certain retailers and Klarna is no exception. One example where Klarna is unique in this regard is in their ‘Try Before You Buy’ program powered by their 30 Days to Pay product.

Try Before You Buy is similar to the old consignment sales concept that used to exist in boutiques, where VIP customers could come to the store, select items, walk straight out and pay for the items they kept at the end of the month.

Klarna has these types of partnerships with eCommerce giants Alipay and Amazon.

We’re seeing it in China, with Buy Now Pay Later accounting for 50 percent of Alipay’s total volume, and we have seen Amazon already beginning to experiment with [this solution] as part of the Amazon Prime Wardrobe offering.

In addition to the eCommerce partnership with Amazon, they are also using AWS to build their own banking infrastructure.

Klarna has its own core processing system built with Amazon Web Services, enabling it to support conventional banking products. The company, which is based in Sweden, also has a Swedish banking license.

Klarna recently raised $1 Billion in Q1 2021 at a $31 Billion valuation. The company had previously raised more than $2 Billion before that.

Klarna Bank AB said it raised $1 billion at a valuation of $31 billion, triple the price investors gave the Swedish payments firm during its last funding round, following rapid growth in its U.S. business.

The company has talked about a Direct Listing, possibly as early as later this year.

Not that valuation is everything, but this was a company that was all set to become an IPO darling in the $50B range in 2022. Now it is notorious for being one of BNPL’s brightest lights to fall, at least temporarily.

For comparison sake, Affirm (Ticker: AFRM) is down about 90% YTD (Year-to-Date) in 2022. Afterpay was acquired by Square (Block) in Q3 ’21 at the peak of its valuation but would have likely suffered a significant haircut from the nearly $30 Billion that was shelled out by Square.

The BNPL business model revolves around generating significant revenues on the merchant side of the transaction (4 – 6%), while the consumer pays nothing (assuming they pay on time). In exchange for these high fees (roughly double credit card fees), merchants bear 0 repayment risk and in many cases view the fee relative to customer acquisition in retail.

As discussed above, the original Installments option is typically what is referred to when discussing BNPL, where purchases are made for small dollar amounts and then the BNPL provider is repaid over 4 periods. It is the Financing option that the likes of Klarna and Affirm overextended themselves on in a quest for market share. These are typically higher-value goods and carry more like a traditional loan or credit-card repayment.

Using Affirm as a proxy:

The business model fails if delinquencies are high because the relatively thin Net Margins of ~2 – 3% get eroded very quickly if delinquencies tick over a certain threshold. Using the above data from Affirm (30 day delinquency ex-Pay in 4):

We can see percentage wise (~100%) the rapid increase around or about Q3 ’21 when Affirm’s stock peaked at nearly 20X higher than what it is today.

We can guesstimate that the same thing happened to Klarna in order to suffer such a precipitous drop in valuation. Delinquencies outside of the ‘Pay in 4’ product were likely significant, and if Klarna were to be revalued at the end of 2022 it could even be below $6 Billion.

Not that this wasn’t entirely unforeseeable. There were probably many warning signs that began flashing in the latter part of 2021.

As a result, the most interesting Business Model Analytics to track going forward as the industry evolves will be around the credit portfolio of the BNPL players themselves: late of late payments and/or defaults.

Klarna’s strategy in 2022 focused on the launch of Spotlight, a video-shopping app that acts as an innovative customer acquisition funnel for its merchants.

There are three layers to the strategy of Spotlight:

Another innovation of Spotlight is dynamic, curated shoppable video content in the Klarna App, because today’s younger shoppers are all about moving images, hence the popularity of TikTok and YouTube.

Live video shopping is set to boom in 2023 and beyond as an extension of eCommerce, so the move by Klarna makes a lot of sense. Their goal is to have their customers (who skew younger, the primary audience for networks like TikTok) originate their shopping-based searches through Klarna on an ongoing basis.

Part of Klarna’s platform is a module that allows retail brands to connect with creators and develop partnerships, influencer campaigns, etc. As we have seen with Video Ad networks, bringing creators to the core of the experience is the next big push by the likes of Meta (Instagram), Google (YouTube), and TikTok.

While TikTok, YouTube, and Instagram lure creators in by offering them a % of the Ad Revenue (typically 50/50), Klarna connects creators directly with retailers to run campaigns that aren’t contingent on Ad Revenue. It is a different model (performance marketing) hoping to generate similar results (ie. conversion), which is why Spotlight will compete for spend with other Video Ad Networks.

Thus after a tough 2022, Klarna has a new tool in its arsenal that can not only drive more eyeballs and wallets onto their platform, but also a new revenue stream driven by business model innovation.

Klarna’s CEO has tried to set the narrative around long-term growth and – non unexpectedly – is trying to create a relatively short-term horizon for ‘monthly profitability.’

Siemiatkowski told FT his goal is for the buy now, pay later (BNPL) company to reach monthly profitability by August or September next year, although he cautioned the company could still see a full-year loss in 2023

While the company is not public, those investors in the 2021 and 2020 rounds are heavily underwater, and the 2019 investors are getting close to a break-even based on the last valuation.

The company has taken in $Billions in capital and seemingly miscalculated in their U.S. expansion strategy. They expanded aggressively around Financing and moved into the U.S. impressively in 2020/2021, only to see the market crumble in 2022 for a variety of reasons. Klarna’s volumes soared in 1h ’22, meaning so too did their revenues.

Klarna’s customers bought $41 billion worth of product on its service globally in the first six months of the year, up 21% from a year ago

Their delinquencies also soared and consequently they were forced to patch up holes in their balance sheet from larger-than-expected Credit Losses.

1 Krona is roughly $0.1 US. So they took ~$290 Million in Credit Losses from the U.S. alone in the first half of 2022. This is very likely to be the reason they needed to raise more capital in spite of the huge valuation haircut.

Thus the question is, is anything other than a turnaround of the U.S./global economy going to save Klarna in 2023 and beyond?

It is a very compelling strategy because:

Klarna’s outlook is filled with unknowns. While they continue to innovate and offer retailers new customer acquisition channels, they are also dealing with the specter of further credit losses and a murky outlook in the U.S. and beyond. Thus they will try to balance the unknowns with the knowns and re-right the ship in 2023 and beyond.