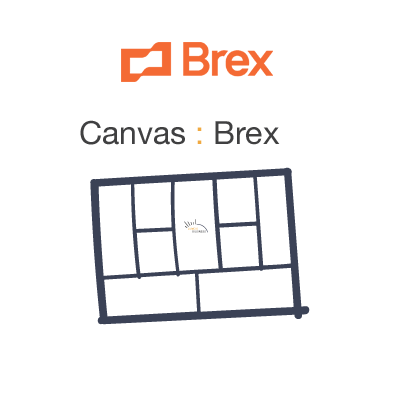 While the payments revolution has no doubt reached the retail B2C sector, the same cannot be said about commercial B2B payments. Card payments make up a tiny portion of the whole, while cheques continue to dominate.

That’s why this Business Model Canvas is about Brex, the B2B Payments upstart built by two Brazilian entrepreneurs.

Brex – Stumbling into the Problem, Finding a Solution

As with many innovations, stumbling into the problem happened by coincidence rather than intent. Two Brazilian entrepreneurs entered YCombinator for their VR (Virtual Reality) startup in 2017, and despite having $125K in the bank and $1-2M in Venture Capital (VC) funding secured, the duo couldn’t themselves get access to a business credit card or business line of credit. That’s because business credit is based on FICO scores, and coming from Brazil meant they didn’t qualify. And so out with the VR startup and in with Brex.

Meanwhile, card adoption is only 4% not for a lack of demand, but because of the significant friction in the accessibility, onboarding, and utility of the product. Most banks and card providers ask for excessive documentation, take 3–5 days to onboard customers, and require a personal guarantee from business founders and owner-operators.

Most notably in the last year – since the onset of the pandemic – we have seen the rapid rise in card payments in the B2C (Business-to-Consumer) space. Checks written have gone down dramatically, while card payment volumes (total volume from credit cards is marginally higher than debit cards) have risen exponentially over the last decade.

Meanwhile ACH debit transfers exceeded checks written in the U.S. for the first time in history in the B2C Payments space in 2018. But for all of the shift in volume in the B2C space, the majority of B2B payments still happen in Checks and Cash.

The staggering part of these market dynamics is that the B2B Payments market is almost 3X the size of the B2C Payments space in the U.S. Not to mention several multiples larger when you factor in global payment volumes.

The US B2B payments market is three times the size of the B2C market—yet B2B digital payments penetration is 36%, half as much as B2C (67%). B2B credit card adoption is especially low, accounting for only 4% of the market.1

And so Brex began with a 30-day charge card for American startups – it’s initial market – which had automated credit limits with quick approvals based on cash balances.

Because of how this system is designed, the average SMB uses at least six different financial services and software providers to manage its business.

The fragmentation in the business banking world has created an opportunity to companies like Brex to become household names among startups and SMBs looking for corporate cards, B2B payments, and other expense-management solutions.

How does Brex make money?

As Brex Card is a business credit card (charge card), they make money that most credit-card companies make money – on the Interchange Fees. Every transaction that goes through via a credit card has an average 2 – 3% fee that is split between the Issuing Bank, Merchant Bank, Payment Processor(s) and Card Networks. In this particular case, Brex is partnered with Mastercard for the corporate credit card.

With the Brex Card there is a Rewards element tied to spending with certain partners that also acts as a revenue stream, although it is not the principal revenue stream of the credit card. Because it is a charge card, the balance must be paid every 30 days, meaning there is no interest earned on unpaid balances. There is also a daily charge card.

Traditional banks look at the financial history of a company to determine if the business is creditworthy. Brex underwrites the borrower in real time based on current data.

Because Brex underwrites business credit in an atypical way, they have a different type of customer than their competitors. For one, there are no personal guarantees required. Their model is based on real-time data, which germinated from the concept of analyzing cash balances in the accounts of startups in the earliest stages.

By focusing on the startup niche, they were able to figure out how to grant generous credit limits to new businesses without running up massive credit losses.

These methods have proven to be highly efficient: Brex’s credit losses have been lower than those of Amex and Silicon Valley Bank, even when including the impact of COVID-19.

Brex provides a payments avenue for its customers, as discussed above, via Brex Cash. With the collective cash balance it has in the bank accounts of its customers, it can lend that money out to other companies and earn a Net Interest Margin (NIM), as is the standard for the banking business model. Average NIM for U.S. Banks in 2020 was in the low 3% range.

Brex … relies on a pair of jumbo credit lines from old school banks — Barclays and Credit Suisse— for a total of more than $300 million in revolving credit facilities, to make loans. If Brex customers had losses beyond a certain threshold, the banks could’ve yanked the credit lines, which would’ve been a disaster.

Finally, the Brex Premium offering is a monthly subscription fee of $49 independent of how many users, etc.

We can see that the headline metrics mentioned above, that the company earns revenues through a combination of revenues from its banking + subscription business lines, while earning a take rate on TPV (total payment volume) from interchange fees associated with payment processing. The company applied for an Industrial Bank Charter in February 2021.

Typically banks and corporate credit-card companies are very commercial in their strategy and work with other corporate partners in the industry to create new channels, whether for marketing or co-branding opportunities. What makes Brex’s story unique is that because they came at the problem from the startup lens themselves in the YCombinator incubator program, their early adopters were startups.

This is not the typical niche for an early-stage bank or payment processing company. In the case of Brex, the difference was that the startups they granted credit to were funded by YCombinator and its partners.

Focus on the ‘Startup Niche’

In this sense, the initial strategy for Brex in 2018 – when they launched Brex Card – was a community-centric strategy built around Seed and Series A startups. This strategy enabled them to get to 1,000 customers within 6 months of launching.

Brex’s product-market fit was instantaneous, and the product has spread like wildfire among venture-backed startups. Within five months of launching, Brex grew from 100 to 1,000 customers. In the less than three years since launching, they’ve scaled to over 20,000 customers (including 60% of all YC companies).

The early adoption in the startup segment enabled them to achieve a ‘wildfire-like’ growth rate, but their core models wouldn’t have automatically crossed-over into the mainstream SMB (small and medium business) segment . So they retooled their models.

Demand for frictionless financial services soon spread far beyond venture-backed startups. Every month, more than 10,000 businesses across the country were signing up. But because their underwriting system was built for tech startups, Brex had been turning away more than 80% of those potential customers. In late 2020, Brex decided to retool their system to serve more customer segments.

Scale-up into the SMB Market

This has again enabled the company to continue their wildfire-like growth rates, with traditional SMBs now accounting for 70% of new-signups in Q1 2021. Mid-sized business are also now signing-up for Brex as the utility of their toolset increases.

… have allowed it to target more traditional small-and medium-sized businesses, which now account for 45% of its customers. In the first three months of the year, Brex has seen total customers climb by 80%.

Like all other Fintechs in the Challenger segment, they partner with established and trusted firms like Mastercard for the issuance of Brex Card, while they partnered with Boston Radius Bank to launch Brex Cash.

They also offer integrations with accounting/expense management tools like Xero, SAP and others to make these tasks easier for their clients, which in effect function as pseudo partnerships. They also have built an ecosystem of accountants, brokers, and investors to augment their offering to their core segments – startups and SMBs.

Overall, Brex had a very unique strategy that centered around startups in the early stages and was more community-oriented. As the business scaled, they had to tweak their unique underwriting model to enable them to reach mainstream SMB and mid-sized businesses, and we now see more commercial partnerships forming as Brex moves towards becoming a full-scale business bank in the U.S. in the years ahead.

While there is no clear indication or timeline around an IPO, one of their major competitors, Divvy, was recently acquired by Bill.com for $2.6 Billion, a price well above the $1.6 Billion the company was valued at in a January 2021 fundraising round. This signals the increased value those in all corners of the market are seeing in the segment.