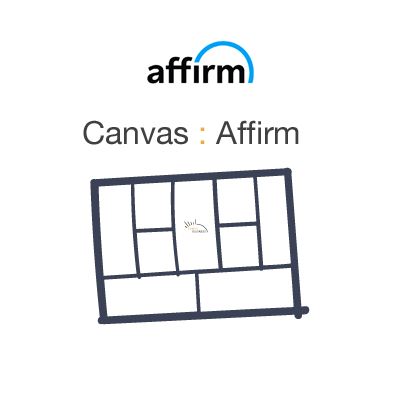 Affirm is another company to emerge from the Paypal mafia. Founded by Paypal co-founder and CTO Max Levchin in 2012, Affirm has come to the market with its BNPL (Buy-Now-Pay-Later) solution, but as we will see in this Business Model Canvas post, the company’s ambitions go far beyond credit.

From a business model perspective, Affirm is centred around merchants. As of its most recent quarter, the company had 12,000 active merchants, buoyed by their partnership/integration with Shopify. In one part of their business model, as we will see below, they charge merchants a fee of ~5% of the transaction to offer consumers ‘interest free, no-fee loans’ that are payable in 4 installments. The company counted 5.4 Million consumers in its most recent quarter, and while these consumers are originated via the merchants, all the details/payments for the BNPL transaction are handled on the Affirm app itself.

BNPL is billed as a competitor to the credit-card industry. Currently payment volumes from BNPL total only about 1% of total volumes, but gross merchandise volumes are expected to grow 10-15X in the next several years to over $1T.

Within the global BNPL industry, Klarna (Sweden) and Afterpay (Australia) are dominant. Both companies have Market Caps (Afterpay is public, Klarna is planning an IPO in the near future) of ~$30B, while Affirm is worth approximately half that.

How does Affirm make money?

Like most BNPL companies, Affirm earns a commission from merchants (ie. Network Revenue) on each sale that typically ranges between 4-6%. This is the standard model for most BNPL disruptors like Affirm, Afterpay, and Klarna.

In addition, Affirm earns Interest Income from loans that it originates, whereby consumers are late paying back their original BNPL loan.

This is the model that Affirm offers its merchants:

Technically, the core BNPL model has no fees and is interest-free as long as the 4 installment payments are made on time. Affirm’s model does create a pseudo credit-card type model where Affirm earns a small fee and interest on the loan. The distinction between categories likely has to do with the price of the items that are offered. BNPL originally focused on smaller value items. Players like Afterpay (capped at $2,000) and Paypal ‘Pay in 4’ (capped at $600) have hard caps on the value of items that can be purchased using their BNPL solutions. Affirm (upper limit of $30,000) and Klarna (upper limit of $10,000), on the other hand, have higher limits but do some form of ‘soft’ credit scoring (see Klarna’s policy) where users are ‘pre-qualified’ to be able to spend certain amounts.

Many of the leading BNPL players like Afterpay found their niche in low-cost items and are now expanding upmarket by offering higher-priced items. Affirm has always had their sights set on the broader market and boast the highest Average Transaction Value and Average Spend in the market. The company also has an Average Annual Spend by Repeat Customers of $2,200 and high Loyalty to the platform, with 64% of transaction being driven by Repeat Users.

Different strategies result in different respective Business Model Analytics, and Affirm is seeing the results of its strategy in metrics like those above. By being at the higher end of the market, the company opens themselves up to more credit risk, but also a larger merchant funnel.

When customers fail to pay back a merchant, it is Affirm who is responsible for the loan, not the merchant; this is part of the value proposition that BNPL players offer in order to charge a 4-6% merchant fee. In its S-1 (released when going public), Affirm had a 36-month trailing delinquency rate (default on loans) of 1.1%.

Based on its latest Earnings report, Affirms splits revenue roughly 50/50% between ‘Total Network Revenue’ (commission from merchants/virtual cards) and both ‘Interest Income’ and ‘Gain on sales of loans’ (where they sell their loans to a 3rd party bank). One way to contextualize this would be to say that at this point roughly half their revenue is payments related, while the other half is lending related.

The merchants themselves acquire the customers, but all details related to the loan happen on Affirm’s own app, meaning that Affirm does create a customer funnel through its merchant network that itself can become more valuable over time.

This is especially true now that the company is gearing up to launch its own in-store debit card to consumers in the months ahead. They now are offering a FDIC-insured Savings account with 0.65% APY (average percentage yield) to help savers earn interest. Essentially, Affirm starts to look more and more like a Challenger Bank as they expand their core offerings.

Affirm is focused on commercial-partner strategy with Shopify. This partnership offers merchants an integrated experience between Shop Pay and Affirm’s BNPL solution.

As this solution is just now rolling out to Shopify merchants, having the original 10,000+ just come on to the platform in the last 30 days, the expectation is that this partnership will drive a significant amount of merchant volume for both Shopify and Affirm. According to Shopify’s marketing materials, 1 in 4 merchants sees a 50% higher AOV, along with a 30% faster checkout time. That is why the combined Affirm product is as much a Customer Acquisition Cost (or “Marketing Device“) as it is a Payments cost.

Shopify actually owns a significant % of Affirm (> 5%) stock thanks to the deal the two companies struck around the integration. How the companies split revenue in this integration is not clear, as the merchant pays for the Shop Pay Installments solution as a whole, it doesn’t pay for for both BNPL from Affirm and payments from Shopify.

Acquisitions can also function as an extension of Partnerships, and Affirm recently acquired Returnly for $300M in late April of 2021. This gives the company an additional tool in the post-transaction returns process that it can offer merchants to help remove friction for online purchases. They also acquired Canadian-based Paybright back in December 2020 for $340M to expand their pipeline into the Canadian market.

As the company has a significant runway in the next 5 years in both BNPL and consumer finance, expect to see more commercial partnerships with Fintechs and innovative eCommerce players in the years ahead.

Affirm is a venture-backed company that recently completed an IPO on the Nasdaq. The company sold 24.6 Million shares at $49 per shared back in January for a total proceeds of $1.2B valuing the company (AFRM) at around $13B at the time of IPO. It had raised more than $1.5B prior to the IPO.

Allows consumers to Buy-Now and Pay-Later (BNPL) in 4 installments without fees or interest: