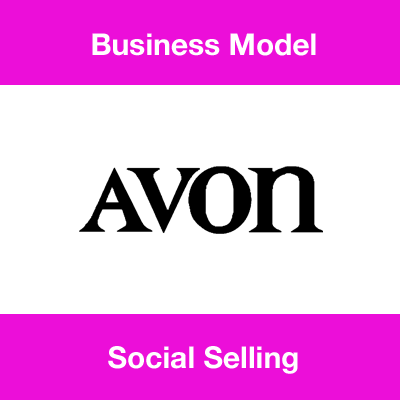 Avon was an iconic brand in its era. The Direct Selling beauty retailer was famous among women for its enterprising approach to sales, enabling women to sell various lines of cosmetics to their peers and earn a living in the process, or at least some extra money. Their star faded away, but nowadays ‘Social Selling’ is coming back. Will we see the “Avon model” renewed and reinvented?

Various mistakes were made by Avon, which at one point was one of the cultural icons of its time in the U.S. and worldwide. A new CEO – Andrea Jung – was appointed in 1999 and with her previous experience in the luxury industry, she tried to give the brand a (very expensive) facelift. Advertising spending increased from about $63M in 1999 to over $400M at its peak in 2010 as the company tried to go upmarket. This for a company whose average Rep was earning less than minimum wage.

Avon typically attracts representatives earning below $50,000. It costs $10 to sign up, and most reps sell Avon part-time and make on average less than minimum wage doing it.

Essentially – as we have seen commonly with unglamorous business models that just work – someone comes in and tries to make it glamorous. Avon’s tagline in its glory years was “Ding Dong Avon Calling” and in the Jung era it became “The Company for Women.” The push was made to turn a direct-selling cosmetics business into a retail beauty business and it failed miserably.

What is Direct Selling?

In a traditional retail model, a brand will lease space and advertise to pull customers to the store. Direct selling is the opposite, where company Reps (Representatives) push business to potential customers by going door to door, or directly engaging with potential customers.

In some ways, Direct Selling is synonymous with being push-y, which which is why the model’s glory began to fade as the Internet became a thing.

Conversely, Direct Selling builds on relationships, and it is precisely these types of relationships that Avon tapped into in the first place.

In its heyday, Avon sold only ‘Avon’ products and there were no physical Avon outlets. In the years leading up to its downfall, it expanded into retail and tried to become a rival to some of its luxury peers with a new Category expansion strategy.

BeComing was both a category of new products paired with a retail foray into physical Sears and J.C. Penney locations

The advent of BeComing, a more upscale 350-stockkeeping-unit beauty collection, will signal the beauty giant’s first major step toward adding a distinct new retail business to attract a younger, more mall-driven consumer on top of its $5.2 billion direct-selling business.

The strategy seemed clear enough on paper, but the idea of going after a younger, ‘more mall-driven’ consumer was antithetical to everything Avon had become up to that point in history.

The ‘BeComing’ venture itself failed, but the company’s stock managed to stay afloat (worth $12B in 2004) in the early 2000s while all these new retail moves were happening. The company tried many different initiatives in subsequent years, but never really regained its footing despite still being in existence today. Avon Products was acquired by Brazilian-based beauty conglomerate Natura & Co in 2020 via a share swap, at a time when Avon’s market cap was around $2 Billion.

Obviously, nowadays, we wouldn’t expect to see the resurgence of door-to-door Reps like we saw it the 50s, 60s, 70s, 80s, and 90s. The Internet has changed the distribution structure of the direct selling model, but it hasn’t really changed the nature of the business model itself.

The advent of TikTok and other video-based sales channels has given rise to headlines such as “Direct Selling is more relevant than ever“ because a younger generation of digital-savvy influencers become the new door-to-door sellers. The Avon brand itself, for example, never regained its traction in developed nations but became a hit in certain emerging markets. Having a brand like Avon – or other equivalents – to work under the umbrella of is hugely important for young people trying to generate more ‘entrepreneurial’ income streams.

The question then becomes, what separates a retail brand that invests in influencer marketing from a direct selling brand?

A retail brand will principally sell its product through its own retail channels (including eCommerce) or wholesalers, depending on how it is setup. Thus the product moves from the manufacturer to the wholesaler/retail channel to the customer. A direct selling model cuts out the middleman step, getting the product from the manufacturer to the customer.

The modern day version of this is D2C (Direct to Consumer), except that Direct Selling Reps are incentivized with a % sales commission. Using Avon’s commission structure as an example:

In other words, the Direct Sales business model is driven principally by sales incentives. Let’s keep in mind, Direct Selling is not a MLM (multi-level marketing) scheme at its core. It would only become one if Reps earned money based on the number of people they had recruited beneath them. There is always a chance a Direct Selling business becomes a MLM, but it is not certain.

As part of becoming a Rep in the case of Avon, you get an eCommerce storefront that is basically just a referral code for all purchases. Items can be delivered directly to the home of the Rep or direct to the customer via the Rep’s storefront ie. customers can place a P2P order via the Rep, or order through the branded storefront, and either way the Rep will get some commission. There is also training, sales materials, and a community of other Reps that help entice others to join.

A quick look at ‘Direct Selling‘ and ‘Social Selling‘ on Google Trends and we can see that in the U.S. (the leading market in consumer discretionary), they are running pretty close to ‘neck-in-neck’ in terms of overall interest.

The difference linguistically between ‘social’ and ‘direct’ is that there was no Internet and/or Social Networks when ‘Direct Selling’ became prominent. The idea that you would have your whole network at your fingertips would have been crazy even 20 years ago. The ongoing development of the ‘Social Web‘ means that the idea behind ‘Direct Selling’ will likely continue in a much more social and organic way.

The incentive structure will become embedded within the social web itself to help the creative + influential members of various verticals and communities sell naturally. How? je ne sais quoi (I don’t know).

One could look at the diagram below and say – “those are NOT the networks where social commerce takes place.” We have Instagram, Depop, TikTok and other networks where influencers convert followers into commercial transactions. True. But these networks below are where are a lot of communities are being built. Communities are where the conversations happen, and as soon as they start to add payment rails to the equation, voila!

As much as influencers “influence” purchasing decisions, they are not as influential as family, friends, or colleagues. Even if the 14% number below has shifted upwards over the last 3 years (the study was conducted in 2019), they are a fraction compared to family (77%), friends (75%), and colleagues (38%).

In the emergence of multiple, bona-fide community networks, these conversations will turn into commerce (if so desired) because trust is high within those communities, while trust in brands, celebrities, and influencers remains relatively low outside of those communities. Networks built for celebrities, influencers, etc. can certainly sell goods; but if the real family, friends, colleague conversations happen away from there, then the model will shift.

Social selling will likely intensify in the future, but not until brands like Avon emerge, as the model requires brand legitimacy and equity as a key component to driving sales under this type of model.

Overall, relationships mattered – seemingly – a lot more in the past when it came to business. If Social Selling starts to reemerge as a ‘trend’ going forward, then they will start to matter a lot more in the future again.